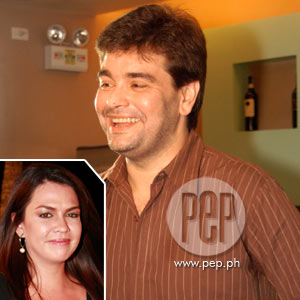 A day after Lotlot de Leon expressed her feelings about the nullification of her marriage with Ramon Christopher, the latter appeared in a taped interview in Showbiz Central to say his piece about the end of their 19-year-old marriage.

While Lotlot said she felt mixed emotions upon learning about the court's decision, Monching (Ramon Christopher's nickname in showbiz) said that he felt happy for his former wife. The couple got married on March 27, 1989 at Club Filipino in Greenhills, San Juan.

Did he felt any pain upon knowing about the decision?

STILL PARENTS. Despite the nullification of their marriage, Monching agreed to Lotlot's statements that they will still be working together as parents to their four children.

Monching was also proud that their children understand their situation.

Like Lotlot, Monching is also now ready to face a new life. He said that in this experience he learned, "To take responsibility for the things that you do. Dati kasi masyado akong carefree, masyado akong ano... Ngayon, kapag may trabaho, magtrabaho ng mabuti."

Lastly, Showbiz Central asked Monching if he would be open to finding a new relationship. He replied indirectly, "Hindi na natin alam yun, 'di ba? Siguro we'll cross the bridge pagdating natin doon, when we get there. Mahirap magsalita nang tapos. Pero for now, I think we're better off as friends and as parents to our children."