Plans are underway for Aga Muhlach-Sharon Cuneta movie next year 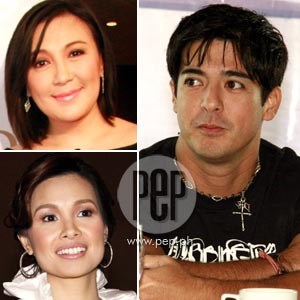 Aga Muhlach's second movie with Sharon Cuneta (inset, top) is in the planning stage right now. Aga would also be willing to another movie with Lea Salonga (inset, bottom).

With the sitcom That's My Doc, the box-office hit When Love Begins, and a new endorsement deal with Sun Cellular tucked under his belt, premier actor Aga Muhlach feels really blessed these days.

"Sun [Cellular] is a new player, there's room for growth and improvement, so I want to be a part of that. It's a new leaf, bagong pahina sa buhay ko 'to."

And speaking of new things in his life, more projects are lined up for the talented 38-year-old actor, including a Star Cinema movie with the Megastar Sharon Cuneta in 2009.

There are also rumors that Aga will guest at international star Lea Salonga's 30th anniversary concert billed Lea, My Life... On Stage! on May 23 and 24 at the Philippine International Convention Center Plenary Hall.

"Well, I'd love to do that. But Lea Salonga singing, an orchestra... What am I going to do there? Magpapatawa na lang ako doon!" Aga says with a laugh. "Pero kung magge-guest talaga ako doon, then I will insist that I sing, di ba? I'll sing one song, a duet with her. ‘Pag pumatong na ‘yong boses ni Lea sa akin, believe me, ang ganda ng boses ko!"

Will there be a follow-up anytime soon? "I'd love to do another movie with Lea, of course. Because I spoke with the husband [Robert Chien], parang sabi niya, ‘Lea can only do a movie if it's with you.'"

This was confirmed by Lea herself at the presscon of her anniversary concert last May 7. "Only if with Aga," she quipped when asked if she's going to do another movie.