Afternoon TV dramas in the ‘90s 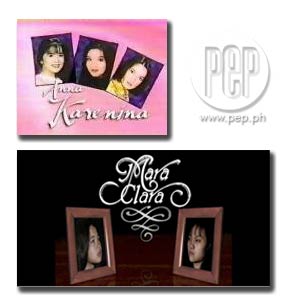 Before remakes and foreign teleseryes occupied the afternoon block in television, Filipinos followed and enjoyed the stories of long-running teledramas and drama anthologies.

Afternoon siesta is a Flipino custom, which we inherited from Spanish colonizers, that makes us relax and re-energize for an hour or so after lunch. However, with the continuous evolution of TV programming, TV networks have kept telenovela lovers awake in the afternoon.

While some viewers are more familiar with teleseryes shown in the evening, or what's called the "primetime" block, other Pinoys are fond of exciting afternoon dramas to while away a quiet afternoon.

PEP (Philippine Entertainment Portal) lists down some of the memorable Pinoy teledramas before Koreanovelas (others were re-runs) and TV adaptations of classic Filipino drama movies invaded the afternoon slot.

DAISY SIETE. This could be the longest-running soap opera in the afternoon block. Now on its 18th Season, Daisy Siete's main cast, the SexBomb dancers, have proven that they're not only good at singing and dancing in variety shows. The group also showed their acting abilities by appearing daily in Daisy Siete.

The first few seasons after it was launched in 2001, the show featured different light-drama stories weekly. In the following seasons, the producer FOCUS Entertainment Inc. changed the show's format into a regular soap opera. The viewers followed longer stories and more intense acting by the SexBomb dancers.

Daisy Siete also changed the theme song for each season, depending on the stories. Some of these songs actually became hits, like the themes for season 13, "Moshi Moshi, Chikiyaki;" season 16, "Tabaching-ching," and season 17, "Uling-ling."

AGILA. This was the second drama series produced by Television and Production Exponents (TAPE) Inc. It followed the teledrama Heredero in 1987 and ended in 1992.

Agila was initially shown in RPN-9 along with the other TAPE programs, Eat Bulaga, Coney Reyes on Camera, and Okay Ka, Fairy Ko. When RPN-9 and its sister station IBC-13 were sequestered, TAPE programs, including Agila, moved to their new home network, ABS-CBN.

The program highlighted the dramatic acting ability of Val Sotto who played Agila.

VALIENTE. This teledrama was one of the successful programs that TAPE Inc. produced. It ran for about five years (1992-1995) on ABS-CBN, which was also its co-producer, and shown right after Eat Bulaga.

The show was about Teo Braganza (Tirso Cruz III) and "Valiente" (Michael de Mesa) fighting over a hacienda. Aside from the land dispute, these protagonists were at odds over the Valiente's love interest, Myla (played by Mariz Ricketts). She was the younger sister of Teo Braganza.

Like Agila, Valiente was also shown in two networks because TAPE Inc. transferred again to GMA-7 after it refused to sell the rights of Eat Bulaga to ABS-CBN. The teledrama continued for two years in its new network before it aired its final episode in 1997.

MARA CLARA. One might not remember this, but the longest-running teledrama in TV history started in the afternoon block.

For three years since its first episode, Mara Clara was shown after the longest running noontime show Eat Bulaga in ABS-CBN. It was moved to a later timeslot in 1995, giving way to the showbiz talk show Cristy Per Minute. A year later, it was sent to primetime block to compete with the Mexican telenovela Marimar.

Despite the changes in its airing, avid viewers still followed the story of the two young ladies, Mara (Judy Ann Santos) and Clara (Gladys Reyes), until it ended on February 1997. With its success in television, ABS-CBN's film outfit, Star Cinema, created a movie version of Mara Clara just months after it aired its last episode.

ANNA KARENINA. Spending Sunday afternoons indoors can sometimes get boring. This may be one of the reasons GMA-7 created the drama series, Anna Karenina, for its Sunday afternoon block.

Its story was about finding the lost heiress of the Monteclaro clan. During the search, three girls were found,—Anna Monteclaro (played by Antoinette Taus), Karen Villarama (Sunshine Dizon), and Nina Fuentebella (Kim delos Santos)—which made it more difficult to find out who the real heiress was.

Although Anna Karenina was shown only once a week, it drew attention to the most popular love teams at the time. Coming from the youth-oriented show called TGIS, love teams Sunshine Dizon and Polo Ravales; Antoinette Taus and Dingdong Dantes; and Kim delos Santos and Dino Guevarra played more serious roles in this Sunday afternoon series.

LOVINGLY YOURS, HELEN. This GMA-7 Sunday afternoon program could be considered one of the pioneers of the afternoon drama series. It was first aired as a radio program in GMA-7's dzBB in 1981.

Each week, at the start of the program, TV-radio personality Helen Vela would read a story based on the life of a letter sender. After the reading, local showbiz's prime actors then would dramatize the story.

In 1992, after the untimely death of the show's host, Helen's daughter Princess Punzalan took over the program. Later on, actress Boots Anson-Roa replaced her as host while Princess focused on playing the show's lead roles, which led her to become an effective contravida.

CONEY REYES ON CAMERA. This was another afternoon drama series that kept the televiewers glued to their television sets for one and a half hours on Saturdays.

Originally titled Coney Reyes-Mumar on The Set in 1984, the show aired every Saturday after Eat Bulaga. When CAN Television (CAN derived from Coney's real name Constancia Angeline Nubla) took over the production of the show, in partnership with TAPE Inc., it was retitled Coney Reyes on Camera.

Coney Reyes not only produced this drama anthology, she also played the host and played several lead roles. Each week, the program featured inspirational stories acted out by major celebrities, like Vilma Santos, Judy Ann Santos, Vic Sotto, and more.

Until now, TV networks still offer afternoon teledramas for Pinoy couch potatoes. It is noticeable, however, that these drama series have shorter airing periods. Also, most of them right now are remakes of classic movies and foreign shows from Korea, Japan, and even Mexico.