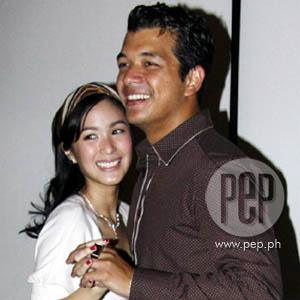 "I'm gonna try to clear things up. I'm gonna know the truth, whatever happened. I'm gonna see and try to make it work," says Jericho Rosales, who is still hoping to have a reconciliation with Heart Evangelista.

"Sad news and, you know, there's been a big mistake," said a confused Jericho Rosales when asked about the alleged breakup with his girlfriend of three years, Heart Evangelista.

In Showbiz Central last Sunday, May 4, Heart revealed that she and Jericho have already called it quits. However, in an exclusive interview with PEP (Philippine Entertainment Portal), Heart did not disclose the real reason for her decision. (Click here to read related article)

ABS-CBN News clarified this with Jericho when he arrived yesterday, May 8, from his month-long taping in Malaysia for his teleserye with Malaysian actress Carmen Soo. He told ABS-CBN reporter Mario Dumaual that there was no formal breakup between him and Heart.

Echo, Jericho's nickname in showbiz, was not only surprised but also clueless about the real reason for their breakup, although he suspects that someone is trying to destroy his image with Heart.

"Whoever said things to her, how come... You guys can show up and say it to my face. I mean, I can talk to you, but I'm not gonna do anything. I'm gonna say, you know, I'm gonna be honest to you and say, ‘Where did you get this?'" the young actor challenged whoever concocted the story against him.

Meanwhile, Jericho dismissed rumors saying that Malaysian actress Carmen Soo is one of the reasons for the split. "Definitely not, no, I don't know about the third party," assured Jericho.

He continued, "You know, whoever is creating this thing... I love Heart, you know. Ano pa bang sasabihin ko? I'm a guy, I could have done anything, di ba? I was so far away, I had so many chances to, you know... But I kept my heart, you know, I saved my heart for Heart."

Jericho still has high hopes to work things out between him and Heart. He wants a serious personal talk with Heart. However, he only has several days to stay here before he goes back to Malaysia for his taping. It is also impossible for them to see each other because Heart is in Dubai right now for the taping of her first project with GMA-7, Asero.

ABS-CBN then asked Jericho if he thinks that it is time to move on. "I can't say I'll move on, I love Heart, e. So, I'm gonna make this work first," the young actor replied.

Jericho also refused to give a message to Heart. Indirectly, he told ABS-CBN, "I just wanna be careful of what I wanna say because I haven't spoken to Heart, and I don't wanna hurt her on TV."