Toni and Alex Gonzaga are the new faces of Faces & Curves 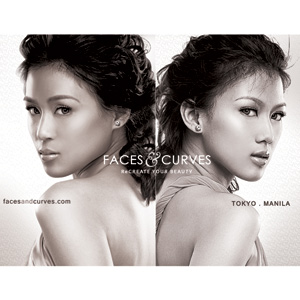 In a press conference and luncheon held at Little Asia restaurant in Greenhills' The Promenade, last May 9, the program began with the exclusive premiere of the center's stunning black-and-white billboard, featuring close-up shots of the Gonzaga sisters, as well as a short video documenting the photo shoot for the billboard.

After Toni was introduced, she serenaded the press people with her hit single, "Catch Me, I'm Fallin,'" before proceeding with the actual contract signing for her latest project.

When asked about how she felt being Faces & Curves' new celebrity endorser, Toni said with a humble smile, "I feel very blessed, and very happy and thankful that I would get to endorse Faces & Curves na talagang I believe in and I trust."

She even joked, "When I heard nga that they're interested to get me, it felt right. I went with it right away. When I found out na hindi na ako magbabayad for facial, siyempre natuwa ako!"

Actually, Toni has been a long-time patron of Faces & Curves' services, especially facial and body skin care, which she gets once or twice a month. But don't get her wrong. She is quick to dispel any hasty generalizations that she's vain.

SISTER ACT. When asked about how she felt working with her sister in a project for the very first time, Toni said, "Wala lang, para kaming nasa bahay. Mas comfortable nga ako kasi I'm with my sister."

Toni has surely received a lot of blessings lately in her career, given her slew of successful movies, her numerous hosting projects, her two hit albums, a concert that led to a repeat last May 2 at the Aliw Theater, and several endorsement deals including her latest for Faces & Curves.

Toni says she's thankful that she has even more projects slated for the rest of the year. "I'll be in a movie, I'll be hosting a new show, and yung iba pa, I can't share the details yet. But for sure it's going to be with ABS-CBN."

Alex is also busy with projects of her own. After debuting in ABS-CBN's teen-oriented sitcom Let's Go! and its spin-off Gokada Go!, she is currently seen in ABS-CBN's Sunday afternoon series Your Song Presents: Without You, opposite Joross Gamboa, Star Circle Teen Quest Batch 1 alumnus, and Victor Basa, Pinoy Big Brother Celebrity Edition Season 2 ex-housemate.

TREATING MOM RIGHT. Spotted during the presscon was Toni's mom and manager, Tin-Tin Gonzaga. With Mother's Day just around the corner, what are Toni and Alex's plans for the special day?