Jericho Rosales breaks down, still in love with Heart Evangelista 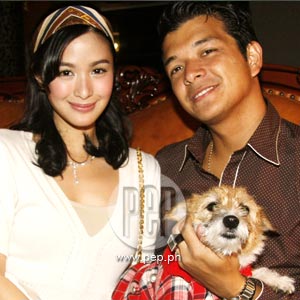 Though smarting from heartache, actor-singer Jericho Rosales is still optimistic that everything would turn out well between him and ex-flame Heart Evangelista. "I guess I have to accept the fact that she said goodbye. I guess it's over. But when you say over it doesn't mean you cannot start over again, it means there's still hope for friendship, and maybe someday we can be together again," Echo told The Buzz host Boy Abunda in a taped intervie

A crestfallen Jericho "Echo" Rosales gave an emotional interview with The Buzz host Boy Abunda and exposed his broken heart.

"Mahal ko pa din si Heart," Jericho confessed to Boy in a taped interview shown yesterday, May 11. Heart Evangelista recently broke up with him after three years of being a couple.

Like any lover reeling from the initial shock of separation, Jericho came to the interview with conflicting thoughts and emotions. He even admitted that he is still in a state of denial. When asked if he's angry, "No. Yes. Can be. I'm cool, okay lang," Echo replied.

COMMUNICATION BREAKDOWN. Jericho and Heart broke up sans any personal confrontation. Since that decisive phone call by the chinita young actress, the two never had the chance to talk again.

Although it was perfectly clear that the relationship was over, Echo voiced out his desire to talk with Heart just to clear the remaining cobwebs. Various stories have surfaced since news of the breakup went public.

The actor-singer denied the rumor that Heart was driven to break the relationship after discovering that Echo is having an affair with co-stars American actress Briana Evigan and Malaysian actress Carmen Soo. Echo co-stars with Briana in the Hollywood film I Luv U Virus while Carmen and Echo worked together in a Malaysian soap opera.

"Here is a man okay? Loving a girl very much and truly. How can I? In my life at this stage. At this point dito sa buhay ko, dito sa sarili ko pagsasabayin ko ang dalawang babae... and I look like this, miserable? I don't think I can do that," he rationalized.

Contrary to public opinion, Jericho argued that the breakup is not a publicity stunt meant to drum up Heart's recent transfer to GMA-7 and to boost Echo's quiet career.

WORTH FIGHTING FOR. More than the public, Heart's parents were the most vocal critics of the young relationship. In fact, Heart's involvement with Echo severely strained her relationship with her strict father. But after almost three years, Heart slowly inched her way back to the good graces of her family.

Many saw Heart's restored relationship with her parents as perhaps one, if not, the main reason, the young actress decided to call it quits with Echo.

Echo is well aware of this, saying, "I know how parents are. I'm touched kung gaano nila kamahal si Heart."

Echo is still optimistic that he and Heart would still be able to pick up the broken pieces. If not, the actor is willing to settle from being a boyfriend to being a friend.

"I guess I have to accept the fact that she said goodbye. I guess it's over. But when you say over, it doesn't mean you cannot start over again, it means there's still hope for friendship, and maybe someday we can be together again.

"We're two people in love and we went through problems, but the love doesn't stop there. But still, kung hindi na puwede ang relasyon, friendship is worth fighting for," he affirmed in the end.