Martin Nievera and Pops Fernandez reunite for One A-More Time 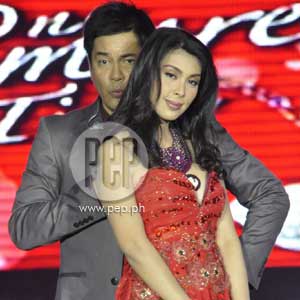 This is the general consensus of the audience of One A-More Time, the Valentine's concert of the former couple held last night, February 14, at SMX Convention Center, Pasay City.

Pops and Martin's heart-tugging duets and playful banter onstage made everyone wish they did not have to break up after two boys and13 years of marriage.

At one point, the two were even in tears, seemingly affected by the songs they passionately delivered. Comedian Jon Santos's cameo performances suggested Martin and Pops's special closeness throughout the night.

ROCK-INSPIRED INTRO. The concert started around 9:30p.m. with Martin and Pops singing rock-inspired renditions of Santa Esmeralda's "You're My Everything," Marc Anthony's "I Want to Spend My Lifetime Loving You," and Ronnie Dyson's "Just Don't Want to be Lonely." Dance group Hotlegs fired up the stage while Martin and Pops were singing.

Next up was a medley of love themes that allowed the audience to relax in their seats, and to remind them of the love that could still be. Tunes included Maureen McGovern's "Put A Little Love Away," Spinners's "Just As Long as We Have Love," The Delfonics's "La-La (Means I Love You)," The Stylistics's "You Make Me Feel Brand New," and Peaches & Herb's "Reunited."

After singing love songs, the former couple reminisced the past with an exchange of playful words. After Pops said a kiss would be okay for her since she's single and "loveless" anyway, and Martin is not, the "Concert King" retorted, "The Philippines is the only country I know where women are proud to announce they're loveless."

But Pops continued telling the audience, "baka merong lalaki dyan na may kagwapuhan o kayamanan to show me... how much they care for me, or something."

MOVIE THEME SONGS. Agreeing that their love story was like a movie, the two sang the theme songs of hit romantic Hollywood movies.

The set list included Ronan Keating's "When You Say Nothing At All" from Notting Hill, Tony Bennett's "The Way You look Tonight" from My Best Friend's Wedding, Kenny Loggins's "For the First Time" from One Fine Day, and Celine Dion and Clive Griffin's "When I Fall in Love" from Sleepless in Seattle.

Halfway through the show, Pops reminded Martin of their breakup. "Siyempre it's your fault," Pops told a smiling Martin.

But Martin changed the topic and greeted his mom in the audience. In turn, Pops also greeted her friends in the audience, which included husband-and-wife Albert and Liezl Martinez.

Pops noticed that the two were not sitting together, so she told them, "When you bring someone, you sit together so you can hold hands."

Then Martin asked Pops what she remembers most about him. "When we travel Martin packs for me," she said.

Martin, meanwhile, said, "I fell in love with your dimples."

They then sang Martin's own song "No Way to Treat a Heart." They also sang Julio Iglesias's "To All The Girls I've Loved Before," changing the lyrics to "To all the girls you've loved before" and "To all the boys that followed me."

The changed lyrics also included the lines: "You're always blowing/ All the chance to get back with me/ You haven't changed, you're always showing/ That you're still in love with me"

In the same song, Martin tagged Pops as "the greatest girl I've loved before."

Jon's second character was Kris Aquino, who spoke about trying hard to keep her relationship with husband James Yap together. She also asked Martin and Pops to get back together.

Finally, Jon's last character, Dionisia Pacquiao was the most hilarious. Jon's Dionisia boasted of her new wealth, and danced flamenco and maglalatik onstage.

Jon ended his set by singing Manny Pacquiao's "Para Sa 'Yo." Martin and Pops sang with him.

SOLO PERFORMANCES. While Pops was having a costume change backstage, Martin entertained the audience with a solo rendition of White Lion's "You're All I Need."

Pops then came up onstage in a sexier dress, and performed a la Lady Gaga. She sang the Grammy-winning artist's hit singles "Paparazzi," "Pokerface," and "Bad Romance."

Martin then joined Pops onstage and praised her for her sexier do. "That's why I always love doing shows with my Concert Queen, Pops Fernandez."

The two then sang the theme songs of recent ABS-CBN soap operas. The set included "Ikaw ang Pangarap" from Lobo, "Kahit Isang Saglit" from the soap of the same name, and "Ikaw" from Dahil May Isang Ikaw.

IN TEARS. "But what about the breakup songs?" Martin asked rhetorically.

The two then sang sad songs alternately. Pops sang Celine Dion's "I Love You Goodbye" and Michael Bolton's "How Am I Supposed to Live Without You." Martin sang Michael Jackson's "She's Out of My Life."

The two also sang together the late Ric Segreto's "Give Me a Chance," Rico J. Puno's "Together Forever," and Willie Revillame's "Ikaw Na Nga."

Martin broke up in tears after the set, and had to walk away from Pops. Meanwhile, a footage of their 2005 Valentine's concert began to play, and the stage was bathed in the dark. In the video, Martin and Pops were reading a letter of their promises to each other.

On stage, Pops appeared to also break into tears when Martin said in the video, "The world is at peace when we're together. My new vow today is to love you forever."

When the stage lights were turned on, Martin and Pops embraced each other and sang Wency Cornejo's "Hanggang" and After Image's "Habang May Buhay."

But only the last song in the concert raised hope for a rekindling of the old couple's broken vows. Martin Nievera and Pops Fernandez's duet of Aiza Seguerra's "Pagdating ng Panahon," sounded so sweet and true, the audience may now have license to hope for a new romantic future for the Concert King and Concert Queen.