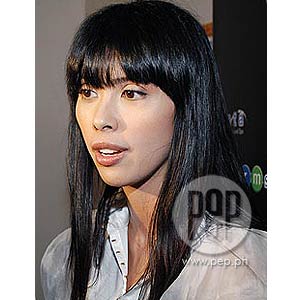 "I always envision myself doing that when I hear of weddings or when I'm in a wedding. It's a girl thing, I think, 'no? Girls are suckers for things like that," says Pops Fernandez when asked about wedding plans. However, Pops clarifies that she and Jomari have no plans to get married yet.

In the media junket prepared for the renewal of her contract with Dermstrata Skin Clinic and Spa, which was held this afternoon, May 14, at the Circle Café in Tomas Morato Avenue, Quezon City, Pops told the media that she was also surprised by the rumor.

"I really don't know. As a matter of fact, nagugulat din ako," said Pops. "Alam mo naman it's either ikinasal na kami, minsan may tumatawag sa akin na mga friends ko, ‘Uy, kinasal na pala kayo?' Yun nga, it's either that or break na kami. It's either of the two things, never really the one in between."

"I WAS NOT ALONE." The breakup issue popped up again when she was allegedly spotted alone in Boracay earlier this summer.

"I wasn't alone!" exclaimed Pops. "I was with, first, Yolly, who is always with me."

She further explained, "Parang ang corny to explain, 'di ba? But, alam mo yun? When I work, I'm usually with Yolly because it's work. I don't like tagging along people unless nga I get to spend a couple of days and usually my kids are with me, some of my family members are also with me. Pero kapag work, work siya.

"It just so happens na when I was there, my friends were there, too. So, siguro that's when we were spotted. How fun to see your friends in another place, 'di ba? So, we're really just having fun. But having fun pala meant I'm supposed to look sad."

The Concert Queen also said that she had a vague idea as to where this rumor started. She said, "I don't know, maybe they haven't really heard so much about us for a long time. We don't go out often. People just assume whatever... whatever."

Pops assured the media that whatever happens in their relationship, she will let her media friends know about it.

Pops added, "If there's problem or, you know, something is wrong, siguro naman we will also say it. I'm not gonna have a presscon or anything, but I'll be honest to say it. The same way na if ever we do decide to get married— which we have no plans of doing—siyempre ia-announce din namin yun, 'di ba?"

"We're not there yet," she answered. "I think we both know where we stand. Sinasabi naman niya, pareho naman kami, marami pa kaming mga responsibilities and madami pa kaming gustong gawin for our family."

BETTER NOW WITH MARTIN. The media also asked Pops about her former husband Martin Nievera. She admitted that after the controversy that followed her revelations in the October 2007 issue of YES! magazine, Pops had a better relationship with Martin.

"Like I said, 'di ba, noon ko pa naman sinasabi? In the beginning of the year, I wanted to start the year right," said Pops. "We really haven't talked anymore about many things. Now, it's really for the kids, yun lang ang pinag-uusapan namin, which I think is very good. Kasi at the end of the day, bata pa rin naman yung importante.

"Actually, noon pa naman kami friends, nagka-problem lang, 'di ba? So, let's not go there to repeat it, baka ma-misinterpret na naman ako. As long as we both know na at the end of the day we both have to take care of the kids pa rin and constantly protect them."

Does she personally get in touch with Martin?

She also told the media that she does not know anything about the current issues her former husband is involved with.

And then she ended in jest, "Siguro kapag he feels like opening up to me, why not? But I still can't share it with you guys."