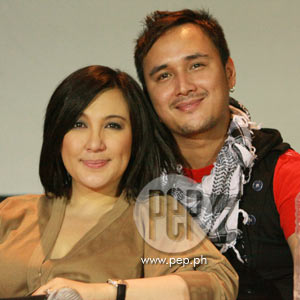 According to Sharon Cuneta, Caregiver marks three milestones: It is Star Cinema's 15th year offering for Filipinos, it marks her 30th year in showbiz, and it is her first movie with acclaimed director Chito Roño. Around 80 percent of the movie was shot in London where the cast members experienced hardships while adjusting to the unpredictable weather.

The Megastar is very proud of this movie because it shows the nurturing quality of Filipino healthcare workers.

"Nirerespeto nila ang mga Pinoys doon. Happy na happy sila sa mga Pilipinong empleyado na nandun because it is in our nature to be caring and loving. Nakadagdag itong pelikula na ito ng ilang libong porsiyento sa pagkatao ko and that is the big difference between this and the fifty-plus other movies na nagawa ko dati. It really touched me and no other film was able to do that."

During the press conference of Caregiver held earlier today, May 14, at the Studio 1 of ABS-CBN, Sharon shares her thoughts on being a caregiver.

"I think it's a very noble profession. It's a very hard job. Filipinos have a special touch and those who leave their kids behind to work as caregivers, you can never think of them as bad parents.

In the movie, Sharon trains as a caregiver under another Filipina named Karen (played by Rica Peralejo) who is the head of the care home where Sarah is assigned. According to Direk Chito, in most of the care homes that they visited in England, the heads of these institutions are mostly Filipinos.

JOHN ESTRADA. Caregiver also marks the first time that the Megastar has been paired with John Estrada as her leading man. In the movie, Sharon plays a teacher turned caregiver named Sarah who has been separated from her husband for several years.

"It was our first shooting day and we didn't have time para maging comfortable man lang. ‘Pag hindi mo kaibigan, it's easier because you know you're there for work. Si John hindi ko naman close pero friend niya ang ex-boyfriend ko [Richard Gomez]. I do not kiss the friends of my exes!"

How was is it like working with John? "He is such a gentleman. It's such a joy working with him. I'm so glad na siya ang napili for this role. Magaling siya."

Is her previous kiss with Richard Gomez more torrid?

"No! This one is more torrid. Because when Goma and I kissed, there's passion. We've kissed many times without the cameras... obvious ba? [laughter] Pero hindi ako sanay na kini-kiss ko ang hindi ko ka-ano-ano."

Given that Sharon portrays a married woman in Caregiver, is her husband Senator Kiko Pangilinan bothered when she does kissing scenes with her leading man?

"Some people ask, ‘You allow her to do kissing scenes?' Allow? I'm not his child. When we got married, equals kami. Siya pa ang nagsasabi, ‘If it doesn't bother me, I don't know why it bothers them?' ‘Yan ang asawa ko.