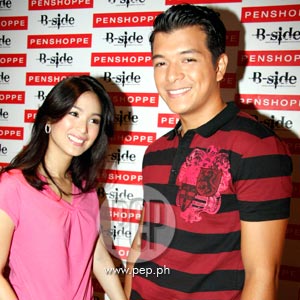 In those good old days, the couple made good use of their celebrity status by supporting the campaign of the Philippine Animal Welfare Society (PAWS). Despite being asthmatic, Heart tagged along Jericho to promote public awareness and care for native cats and dogs. Heart and Echo were also seen together in ABS-CBN’s 2007 primetime soap, Pangarap na Bituin. Jericho played the role of musician Terrence Rodriguez while Heart made a special appearance as the fashionable yet kind-hearted Cassie Salcedo, Terrence’s ex-flame.

THE BACKLASH. As Heart and Echo put it, “everything just fell into place”—from silly sounding “signs” to Post-it notes with kiss marks to music they swapped and listened to together.

But not everything was turning up rosy for the love-struck pair. Soon, petty to malicious intrigues started crawling in which projected the young couple in a negative light.

There were of course the rumor prerequisites: talks of Heart being pregnant courtesy of Jericho, and worse, by another guy. Echo was accused of maintaining a relationship with gay men in the past to augment his showbiz income.

All not true, the couple contested. Between the two, however, it was Heart who carried the brunt of of negative publicity that came in torrents.

One rumor managed to get through inside the couple’s delicate armor and that was the rumor saying that Heart had an abortion. The pregnancy rumor was irritating enough, said the young actress. But the abortion issue was a real eye opener for Heart in terms of how the showbiz media operates.

“A lot of people still believe that I got an abortion. I felt really bad. I felt like everywhere I go, parang nilagyan nila ‘ko ng dumi,” she lamented, pertaining to some of the reporters who instigated and fanned up the rumor.

Heart continued: “I know na nobody’s perfect. Only God is perfect. But as a role model you try to make things close to perfect or set an example. I don’t want to lose that certain edge e, ‘cause I love doing it. I love being an artista.”

The abortion issue died a natural death. But as soon as the nasty rumor faded into oblivion, many people now focused on Heart and Echo’s alleged negative influence on one another, both personally and professionally.

When Heart decided to strike out on her own, many interpreted that desire to live independently as a form of rebellion against her parents who were reportedly against their daughter’s passionate romance with Jericho. That point, although scoffed by Heart no end, had some semblance of truth. In fact, Heart and her strict father ceased communicating for a long time after she moved out of the family residence.

It was a time of growing up and making decisions. Heart and Echo’s transfer to the management team of Manila Genesis Entertainment from ABS-CBN’s talent arm Star Magic was met with cynicism.

According to Heart, her alliance with Genesis was brought about by her desire for spiritual guidance. The allure of fame and recognition had opened up a well of emptiness, revealed Heart.

“There’s a time nga, ‘di ba, that I was going through a lot? Aside from management, I felt that I needed spiritual guidance, stuff like that, a new direction,” she explained.

Spiritual guidance, new management and a new direction—for most showbiz watchers, unfortunately, the move only meant that both Heart and Echo’s once rosy careers were at the bottom of the pit.

YOU AND ME AGAINST THE WORLD. Heart and Echo turned to one another even more for strength and survival.

The projects and their visibility obviously suffered but they countered that that’s exactly the way they wanted their careers to take. Despite all the criticisms, the bubbly couple seemed to be getting stronger and coping very well. Positive moments did trickle in, like when Heart and her father finally patched up their differences last year.

For a while, Echo’s music career, though laughed at by some, took off and even managed to gain attention in Malaysia. Acting in foreign films also beckoned the Mr. Pogi alumnus.

Just a few weeks ago, Heart made headlines when she signed an exclusive contract with GMA-7 after years of being identified as an ABS-CBN talent. She was clearly trying to get her career back on track after slowing down for almost three years.

In the YES! June 2006 issue featuring the controversial couple, the article ended in the affirmative, a defiant stand against critics who smirked on the young relationship:

“Indeed, watching Echo and Heart acting like this—like two kids in a world where all is bright, simple, and carefree—we are tempted to say to anyone and everyone: Let them be. Let them stay this way a little longer.”

A little longer has not turned out to be “for life.”

Last May 1, barely two years since their endearing interview with YES!, and in the wake of her transfer to GMA-7, Heart revealed that she had called off her much-publicized relationship with Jericho Rosales. It was a painful breakup.

The dream is now an echo of the past.