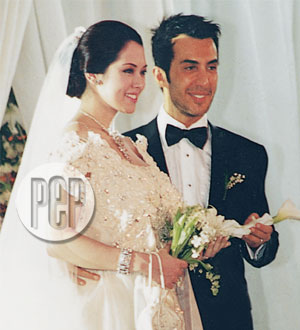 Ruffa was a stunning apparition in white, prompting one wedding guest to gush: "Prinsesang-prinsesa!"

An international beauty queen and movie star from the Philippines who met her groom in France when she covered the Cannes film festival for a U.S. TV network, a business magnate from Turkey who met his bride while buying a boat in Cannes, Swarovski crystal trimmings on a 10-foot cake, 100 security personnel, a P2,500-a-plate dinner, and bottles of P12,000 champagne—that's what world-class weddings are made of.

Their lover story is one for the books. Theirs is the kind of love that crossed territorial boundaries, broke language barriers, defied religious differences.

Sharmaine Ruffa Gutirrez was growing up, she always knew she was destined to be somebody. It helped that she knew she had famous parents. So, even as a young girl, she was showing unmistakable signs of what was to become of her—a star.

In 1993, at 19, Ruffa won as Second Princess in the Miss World Pageant. The win opened doors for a brief international career.

Meanwhile, in another part of the world called Turkey, a young man by the name of Yilmaz Bektas was also growing up. He was the adventurous kind. He had cheated death twice, surviving a motorcycle incident and a fall from the roof of a house.

He went on to become a businessman. After graduating from an American university in Cyprus, he took over the leadership of his family's vast business interests, which had to do with petroleum, communication, trading, and diamonds.

One fateful day in the year of 2000—May 11, to be exact—their paths crossed. This happened in a restaurant in Cannes, in the south of France. She was there to cover the international film festival for The Century Productions of Los Angeles. He was there to buy a boat.

It was love at first sight.

Three years after—March 25, 2003, to be exact—Ruffa and Yilmaz established one of the grandest weddings in showbiz history.

The day after the wedding, Ruffa shared how she felt while walking down the aisle: "It was an overwhelming feeling ... to see all my old friends, to see my family.

"Everyone got tears in their eyes. Everyone was smiling at me, wishing me the best, and I could truly see that they were happy that I had finally found my soulmate. Amid the music, the prayers, the scene... I was so touched. I was moved to tears. I've been dreaming about this day since I was a little girl. Paano ba 'yong magiging wedding ko?

"I always wanted a beach wedding, a princess wedding, a palace wedding, and finally, my dream wedding came true. I'm so happy."