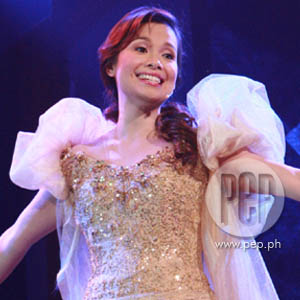 Lea Salonga mesmerized the Filipino audience anew during her 30th anniversary concert Lea, My Life... On Stage! last May 23 and 24 at PICC Plenary Hall.

We were able to catch the last night of Lea Salonga's 30th anniversary concert titled Lea, My Life... On Stage! last May 24 at the PICC Plenary Hall in Manila.

Seeing Lea perform on stage is truly a magical feeling. She was obviously very comfortable on stage as she rendered musical numbers in connection with her 30 years in the entertainment industry.

Lea's story was told in a very entertaining manner with the international star grabbing everyone's attention with her crystal-clear voice and very charming persona. With her brother, Gerald Salonga, conducting the Filharmonika, it was a world-class musical showcase.

In the two-hour concert, the audience learned that at the age of seven, Lea started her career in the entertainment industry when she auditioned the role of one of the King's children in Repertory Philippines' The King and I; that her first lead role was in the stage production of Annie; that her first album was Small Voice; that her first TV show was Love Lea; and so on and so forth.

The audience also learned how hard it was for Lea to shift from being a child actress on stage to a teenage pop star, when she joined the original cast of the youth-oriented show That's Entertainment and toured with the popular Puerto Rican boy-band Menudo.

Lea struggled during those times, following what the producers and the public dictate. All throughout, she admitted feeling "nothing."

Then came the project that she was destined to play: Miss Saigon. This served as Lea's turning point and the start of stardom that she never imagined.

Lea also did not disappoint the audience when she allowed a peek into her personal life—meeting and marrying Robert Chien and being a mother to Nicole.

All these highlights from the career and life of Lea were told in simple but elegant musical numbers that showed Lea's enigmatic presence on stage.

From her childhood days, she did her popular songs, "Tomorrow," "Small Voice," and "Rainbow Connection." From her teenage years, she sang popcorn songs, like "If You're Not Here."

Lea also paid tribute to the West End by singing "Where Is Love" and "As Long As He Needs Me" from the musical Oliver.

After West End, Lea moved to New York when she was chosen by Cameron Macintosh to open Miss Saigon in Broadway.

Then came Flower Drum Song, which Lea calls her "most successful flop." Although it was well received in Los Angeles, the New York critics did not like it too much.

While doing Flower Drum Song in Los Angeles, Lea also found love in the person of Robert Chien. This was also the cue for Lea to sing the following love songs: "Fallin'," "I Still Believe In Love," Kailan?," and "Two Words."

"Two Words" was composed by Louie Ocampo and Freddie Santos specially for Lea's wedding with Robert. While Lea was singing this song, a video of their wedding was shown, capturing one of Lea's most memorable moments in her life—and Robert's crying moment.

Lea also shared the joy being a mother to Nicole.

The international singer also sang some cuts from her albums, like "I Honestly Love You"; We Could Be In Love"; Promise Me"; and "The Journey."

In the last part of the concert, Lea sang the theme songs of the animated movies Aladdin ("A Whole New World") and Mulan ("Reflections"), to which she had lent her voice.

Aside from Lea's colleagues in the world of theater, Aga Muhlach, her leading man in the movies Bakit Labis Kitang Mahal and Sana Maulit Muli, was her guest and he almost stole her show.

The matinee idol served as comic relief to the show, making a surprise entrance three times—first, during the New York portion, then during the album-collection portion, and finally while Lea was singing "Bakit Labis Kitang Mahal."

Aga was a hit among the audience—including wife Charlene Gonzalez-Muhlach and their twins Andres and Atasha—as he made fun of himself, Lea, and even the orchestra. Aga complained that in the two movies he did with Lea, he was never included in the soundtrack.

In the end, Lea granted his wish and they did a duet of "Sana Maulit Muli."

For her encore number, Lea and her guests did a powerful rendition of "I Dreamed A Dream" and another song from Les Miserables, in which Lea played Fantine and Eponine in separate Broadway productions, and a cut from her upcoming musical play Cinderella.

At the end of her performance, Lea was given a well-deserved standing ovation.

It is very rare that Filipinos get the chance to see Lea perform since most of the time, she's abroad making us proud. So in this very rare moment, we feel honored to have witnessed Lea's musical gifts.