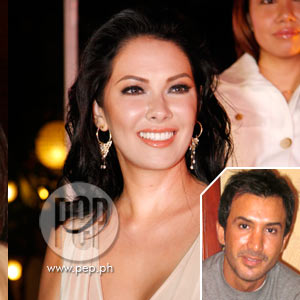 Ruffa Gutierrez and Yilmaz Bektas did not only surprise showbiz denizens with their separation, they also got the public glued to showbiz talk shows to watch their interesting exchange of personal statements.

Last year, the showbiz industry turned all eyes and ears on former beauty queen Ruffa Gutierrez's revelation that she and Turkish husband Yilmaz Bektas decided to file for divorce.

Through Ricky Lo's column published on May 8, 2007, Ruffa explained that "cultural differences" led to their breakup. The TV host-actress further said, "Honestly, we tried very hard to make our marriage work, but then..."

Ruffa also clarified during the phone interview with the showbiz columnist, "There's no other woman."

Later on, in a press statement sent to PEP (Philippine Entertainment Portal), a request was addressed to the media and the public. It read: "Ruffa and Yilmaz will remain committed parents and continue to be friends as they live their separate lives. They ask for everyone's understanding and consideration in respecting the family's privacy during this most difficult time. No further statements will be issued." (Click here to read related article)

Ruffa and Yilmaz had their fancy wedding on March 25, 2003. Their relationship as husband and wife produced two lovely young girls named Lorin and Venice.

Despite the short explanation and the request to respect their privacy, the public's desire to know the real reason of their breakup was strong, and so the issue went on and became the hottest in showbiz for more than a month.

RUFFA'S SHOCKING REVELATION. A few days after the couple released their joint statement, Yilmaz had a phone interview with Startalk (May 12, 2007). Ruffa's husband denied that "cultural difference" was the reason their marriage ended. According to Yilmaz, the "professional career" and "extended stay" of Ruffa were the real reasons they split up.

The following day, Ruffa appeared in The Buzz for an interview about Yilmaz's statement in Startalk. At first the TV host-actress only had good words for her estranged husband. (Click here to read related article)

In fact, she even described him, "Si Yilmaz ‘yong tipo ng tatay na concerned siya all the time, you know—physically, emotionally, mentally. Iyon talaga, nandiyan siya para sa mga anak ko. He would change the diapers, he would sing to them, he would call to them all the time. He is a good father."

After a while, Ruffa explained that she tried really hard to save seven years of marriage. "God knows I tried. You know, kung pagmamahal lang, puwede akong bumalik, pero may prinsipyo rin ako."

Ruffa's mother Annabelle Rama was also in tears when she was interviewed in Showbiz Central. The talent manager vaguely explained the to public why she advised her daughter not to go back to Istabul. "Kaming dalawa lang ni Ruffa ang nakakaalam ng reason kung bakit ayaw ko na siyang pabalikin sa Istanbul."

"IT'S OVER." In spite of their appeal for privacy, what happened next was totally the opposite-the public asked for more of the Ruffa-Yilmaz story.

The couple and even Ruffa's mother became regular guests in weekend talk shows to defend themselves in a word war. Different issues emerged. For one, Yilmaz called his estranged wife "Brutus" while raising the issue of Ruffa's alleged marriage to a certain Richard Daloia.

Yilmaz, who was in Istanbul, said that a friend informed him about Ruffa's announcement of their separation. And when he knew about it, Yilmaz said in an interview with ABS-CBN News, "After that I think [her] name have to be traitor and I'm calling her name now Brutus." Yilmaz was referring to Shakespeare's play Julius Caesar wherein the assassinatedRoman emperor's best friend betrays him.

ANOTHER MARRIAGE? From the first time the name came out in the news, Richard Daloia became entangled in the word war. He was said to be the first husband of the former beauty queen, whose real name is Sharmaine Ruffa Gutierrez. Their alleged marriage reportedly happened in Las Vegas, Nevada.

Yilmaz asked his lawyer to investigate the alleged first marriage of his estranged wife. After his lawyer presented to him the information they gathered, Yilmaz could only say, "It's over. It's closed." (Click here to read related article)

In a different interview, Yilmaz threatened Ruffa that he would file a case against her. "I'm gonna open, as soon as possible, one case. I'm gonna sue her because when she got married with me and during the present day, May 25, [2003], still she's married, and she's against to my family, and she against to her religion, and my religion, too, also." (Click here to read related article)

Out of his anger, he also said the most memorable quote in this very controversial separation: "Lady Sharmaine Gutierrez, whatever it is you deserve, that will [be given] to you. I find you in the garbage and I put you back in the garbage. But still, I will find. I'm not gonna stop whatever I will gonna said. I'm gonna follow my mind, and your Mom and you, and this...I don't know the name yet, I'm gonna find out. I will tell you, each moment has its consequences. My words are not just for you, for your Mom, and whoever he's hiding himself, he's safe. I'm not gonna speak so much, but I will gonna move and take further actions."

MONTHS AFTER... RECONCILIATION. Less than two months after this controversy, Yilmaz surprised everyone in showbiz when he came to the Philippines to visit his two daughters, Lorin and Venice, and to fix their marriage. (Click here to read related article)

In the couple's interview with The Buzz, Yilmaz said, "She send to me a message and she told me I have to come to pick them up. Those were the magic words."

Ruffa explained, "Well, he kept saying, ‘Come meet me here. Come meet me there.' I think it's just proper that he's the man and he should come to me in the Philippines."

The couple also said "I love you" to each other.

"I love her," said Yilmaz. "It's only reason why I'm breathing because of my wife and my two kids."

Ruffa answered to him, "I love you and you have to change. Be sweet and kind."

Some thought that the couple's separation had a happy ending with this reconciliation. Unfortunately, Ruffa and Yilmaz seemed to have moved on with their own lives. Ruffa is now enjoying her life as an actress and a TV host, while Yilmaz was last reported dating 2006 Miss Universe Zuleyka Mendoza. (Click here to read related article)
Read Next
Read More Stories About
Ruffa Gutierrez, Yilmaz Bektas, Annabelle Rama, Ricky Lo
Post a Comment
Featured
Latest Stories
Trending in Summit Media Network