FIRST READ ON PEP: Billy Crawford explains his side regarding transfer to ABS-CBN 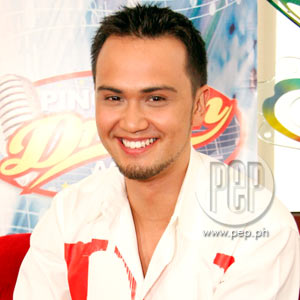 The European company Endemol gave Billy Crawford a special invitation to host the second season of ABS-CBN's Pinoy Dream Academy, which is expected to officially start this June.

After a grueling 15-hour flight, Billy Crawford arrived earlier today, May 30, at the 9501 restaurant in ABS-CBN compound straight from the airport. The 25-year-old singer-dancer looked calm and refreshed despite the fact that he was a bundle of nerves that moment.

"Magandang hapon po sa inyong lahat. It's nice to see you again. I don't think I've been this nervous in my entire life. Why am I nervous? Well, it didn't start off to a great start coz I lost my passport before I got on the plane. That was kind of crazy. I'm nervous coz I'm back in the Philippines."

Many were shocked to know that Billy, who was last seen on GMA-7 for the dance reality show Move, had indeed transferred to ABS-CBN to be one of the hosts of Pinoy Dream Academy and the noontime show ASAP ‘08. This is the first time that Billy has spoken about this topic.

"What happened was, I was in California recording my album and Endemol got in touch with my management for a three month-[contract]. Everyday, I'll finish at 7 o'clock in the morning [recording the album]. They asked me kung puwede akong bumalik sa Pilipinas. My management made the deal with them and I'm just really following them," explains Billy.

Endemol is the Netherlands-based company that is the franchise owner of the Dream Academy series, which has a local version called the Pinoy Dream Academy. The management that Billy is referring to is the YPMP Productions, which handles the careers of most R&B and hip-hop artists in the United States.

Billy is currently working on his album, which will probably be released by December this year or early next year.

"I think the main thing is for me...it's always a pleasure to come here no matter where I go. I know feelings will be hurt here. I don't want to dwell on that, but I'm still the same Billy Joe from before."

What makes Billy suited to host the second season of PDA is the fact that he hosted the French edition of this reality singing competition.

"I did Star Academy in France and they're on their ninth season. It's exactly the same concept. They've had Elton John, Beyoncé, and Stevie Wonder there. I was a part of that in France."

PINOY STYLE. Since his management company YPMP is based in the United States, Billy says that his managers are having a difficult time coping with Pinoy showbiz. "Right now, all my projects and my guestings have to be approved from America. Bago lang ako sa kanila.

"Alam niyo po, sa States kasi they don't know kung paano tayo nagso-showbiz dito sa Pilipinas. That's why they're not with me, they have no idea that there is actually different TV stations. It's hard for them to understand. So when GMA-7 or ABS-CBN talks to them, they handle them as clients. Ako, alam ko na and it's hard for me to deal with it but I'm here."

He also clarifies that Arnold Vegafria is his booking agent while he is here in the country.

The press was curious to learn if Billy had the option of turning down the offer of Endemol. Does he have a say on the projects that he will do?

"I have options, I have ideas. Puwede naman akong magsalita. Pero, of course, business is business, personal is personal," he says.

UTANG NA LOOB. When it comes to talking about loyalty and the Filipino trait of utang na loob, Billy becomes flustered and says, "Utang naloob, siyempre, is very important pero yun ang pinaka-importante. Pagdating sa utang na loob, maraming questions na... It's a very hard question. It's like ‘I give you my hand, you'll give me mine.' Utang na loobis very deep. I've given my everything at respeto rin ay importante."

GMA-7 SHOW. There have been rumors saying that Billy was offered another show by the Kapuso network but he turned it down. Billy explains that timing was the reason for not accepting the project.

"This time, that was when I was signing with my production company. Hindi ko nagawa [yung show sa GMA-7], then Endemol got in touch with my management and I'm free for three months. Yes, it's true, there was a TV show for me [in GMA-7]."

Right after the press conference, Billy signed a contract signifying that he is now officially a Kapamilya star, at least for the next three months. The singer signed up with ABS-CBN for only three months since he needs to return to France by September for another commitment.


Direk Lauren explained that Billy will be seen every weekday for the afternoon update of Pinoy Dream Academy called Uberture. On Saturdays, he will host the performance night with Toni Gonzaga and on Sundays, he will be seen performing on the variety show ASAP ‘08. Meanwhile, Nikki Gil will be seen for the updates and every Sunday.

Direk Lauren also clarified that Billy did not replace Ryan Agoncillo since the latter is planning to concentrate on his acting career rather than his hosting stints.

Pinoy Dream Academy Season 2 will introduce the 32 hopefuls on June 9 and the first episode will be aired on ABS-CBN on June 14.