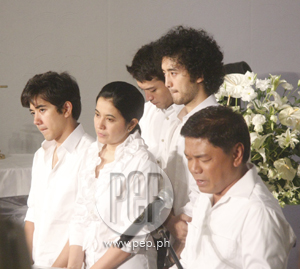 Pastor Ed Lapiz offered a prayer for the family of Rudy Fernandez. Now that Rudy is no longer with them, he asked Lorna, Ralph, Renz, and Mark to make God the padre de familia.

Big names in showbiz, and even in the political arena, spent their last night with Action Prince Rudy Fernandez at the chapel of Heritage Park in Fort Bonifacio, Taguig, on June 11, 2008.

It started with a 5:00 p.m. mass officiated by Fr. Arthur Yap, followed by the necrological service—with Pastor Ed Lapiz giving the special message. The gathering, which was exclusive to family and friends after the first mass, culminated in a program that featured the songs relevant to Daboy and speeches from the people who figured prominently in his life.

THE SPEECHES. The room overflowed with gratitude and good words for Daboy. The first to share her fondest memories about Rudy was his sister Marie Fernandez.

She recalled the five-year-old Rudy who lost his mama at that early age, the struggling actor who was supporting his ailing father—Dr. Gregorio Fernandez—and the famous action star who always made an effort to extend help to his siblings. “Wala po akong hiningi kay Rudy na hindi niya binigay,” said Marie tearfully.

She also recalled how her friendship with Jinggoy was revived because of Daboy’s help. She ended her message with a promise that she’ll be there for Daboy’s family whenever they need help. "Ate [Lorna], tawag ka lang ha."

Bong was on the verge of tears when he narrated how his rift with Jinggoy and former President Joseph Estrada ended because of Rudy’s efforts. He used the word “peacemaker” to describe his kumpadre. “Ating bigyan ng masigabong palakpakan ang isang taong matulungin, maaasahan, at isang tunay na kaibigan.”

Phillip looked back at the term of Rudy as the president of KAPP (Kapisanan ng mga Artista ng Pelikulang Pilipino). “Siya yung Pangulo, at ako naman po ang nagsilbing pangalawang pangulo niya.” He was all-praises to Rudy’s dedication as a leader. And when it came to describing the Action Prince as friend: “Walang sapat na salita upang mailarawan ko ang isang Rudy Fernandez.”

Jinggoy became emotional when he remembered those times he was detained at the Veteran’s Hospital with his father. Almost everyday, Rudy would pay him a visit and bring “siopao, siomai, at mga pagkain.” When he started gaining weight, his kumpadre brought him boxing gloves, a punching bag, and even an instructor.

Towards the end of his speech, he asked everyone to give Lorna Tolentino a standing ovation for being a good wife to his best friend.

THE SONGS. Concert Queen Pops Fernandez and singer-songwriter Ogie Alcasid were the first to render a song for Rudy. They performed Josh Groban’s “You Raised Me Up.”

Tirso Cruz III let the audience hear the song he composed for Rudy. He said the lyrics echo the thoughts of Rudy about his family and friends. He had everyone close to tears.

Jamie Rivera rendered "In My Life," a Beatles original, while Asia’s Songbird Regine Velasquez gave her heartfelt rendition of Barbra Streisand’s “Somewhere,” the theme song of the first Rudy-Lorna movie.

Heart-rending, gratifying, and touching are the words to describe the evening.

The widow of Rudy was very composed while listening to the songs and speeches of her husband’s friends. In her message, she revealed how she endured her moments of sadness: “Alam ko, ramdam ko, hawak mo ako ngayon.”

Today, Rudy will finally be laid to rest. And he will go with immeasurable love from his family, a great degree of admiration from his friends, and countless thanks from the fans and people in show business.