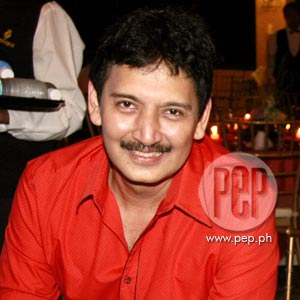 Rudy Fernandez died early this morning after a long, hard-fought battle with cancer.

This was the text received by PEP (Philippine Entertainment Portal) earlier today from Rudy's camp, and it was later confirmed by StarTalk reporter Gorgy Rula.

Rudy or Daboy, as he was fondly called by his friends and fans, finally succumbed after a hard-fought battle with periampullary cancer that lasted for several months. He was 56.

According to Medical Observer, periampullary cancer is "an enlargement of the ducts from the liver and pancreas where they enter the small intestines."

It was only a few weeks ago that Rudy was brought home from the hospital, where the last efforts to prolong his life were exerted.

Before this, Rudy and wife Lorna Tolentino made trips abroad to find the best cure for the actor, the last of which was in the U.S. right after his last birthday celebration on March 3. The supposed one-month trip was cut short when Rudy decided to come home to Philippines.

Last May 10, a healing mass attended by his friends in the entertainment industry was held for him at the Christ the King Church in Quezon City.

Daboy's roots are really in showbiz. His father is film director Gregorio Fernandez.

He made his film debut at the age of three, appearing in Luksang Tagumpay (1956), which was directed by his father. He also appeared in another film of his father's, Emily (1960).

It was in 1970 that the young Rudy decided to really plunge into showbiz while a student at the University of Sto. Tomas.

After playing teeny-bopper roles, Rudy made his breakthrough as an action star in the movie Bitayin Si Baby Ama in 1976.

His last film was Hula Mo Huli Ko with Rufa Mae Quinto in 2002.

He made his last acting appearance on GMA-7's Atlantika in 2006.

He is this year's recipient of 2008 Ulirang Artista Lifetime Achievement Award at the 24th Star Awards for Movies given by the Philippine Movie Press Club (PMPC).


He also received the Film Academy of the Philippines' FPJ Lifetime Achievement Award.


In 2001, he ran for Quezon City under former President Joseph Estrada's Puwersa ng Masa but lost to Sonny Belmonte Jr.

Rudy's remains will be brought to The Heritage Park in Taguig City, and the interment will be on Thursday, June 12.