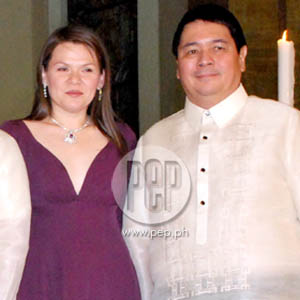 "It's very painful for me to hear allegations of that because that was never the case. I never saw him as somebody who was rich. I knew the family had money, but he was a very simple guy," says Patricia Braun-del Rosario about allegations that she married Mr. Jorge del Rosario because of his wealth.

"Kasi kami, hindi kami involved doon sa nangyayari sa wedding," sabi niya. "Parang lumabas, may narinig kami, nakarating sa amin that they were saying that we just got married, that I married him for whatever reason, which para sa amin they don't even know. Me and Jorge, we've been very, very good friends, gosh! For so many years na, 15 years na kaming good friends."


"We were introduced by mutual friends. We would go out to the point na siya ‘pag may kailangan, may kailangan ng cook, tumatawag sa akin, ‘Hanapan mo ako ng cook.' Or he wants to eat steak or something, we go out. He would tell me, ‘Hoy, make me libre. Let's have dinner.' Yung ganun," lahad ni Patricia.

"Actually, yung love story namin, I can't naman say na it's a love story na long, long, love story because we were good friends. We were really, really good friends to the point na whenever he need something or whatever it may be, he would always call me and ask me for help.

"My daughter and his youngest son were classmates in school. So we would see each other often in school. So, magkasama kami sa parents-teacher. He would be teasing me in school, ‘Girlfriend ko ‘yan pero hindi niya alam,' yung ganun."

"Siyempre naman, because when I met Jorge, in all fairness, the family of Jorge, they've always been well-to-do. But si Jorge really didn't get involved with their family and stuff. He was on his own. So there were times when he needed, you know, when he needed money before, ganyan. He would run to me. And you know, for me, that's what friends do, di ba?

"So it's very painful for me to hear allegations...because that was never the case. I never saw him as somebody who was rich. I knew the family had money, but he was a very simple guy. He doesn't flaunt it, at the same time he did not really have anything to do with their company up until the father died. So, you know, what I mean? Jorge is a very, very simple guy.

"There were things that happened in the family na sila lang yun ang may alam, na he choose to be independent and he did not want to depend on the family. So I can understand. So whenever he needs something, if I can give, why not? Parang ganyan," pahayag ni Patricia.

Dating presidente ng Union Bank ang ama ni Patricia na ngayon ay retired na. "But he still sits in the board of the bank. He was president and vice-chairman of Union Bank at one point. He's still a director of the bank."

"Si Vince is a very lovable boy. So to the point now that when we think about it, siyempre sad pa rin sa amin because we've only spent, me especially, yung bonding time namin with Vince is very, very short-lived. And my two daughters are very, very close to him especially my little one. They're look-alike pa nga. So, yun.

"From the start, all I wanted to do was help because I knew that Jorge was not really... I didn't want to put himself on the line, so I was the one right from the start really trying to help out. So siyempre, masakit sa akin. Si Vince would always ask me for advice. Siyempre, depressed yung tao. Parang takot din sa nangyari. I prepared him and Inah. I told them na, ‘You know, your parents are gonna be mad. You have to accept that. Vince, you have to be prepared for the worst. Tito Bong is really gonna get mad at you.'

"Kasi ako man din, I have a daughter I will also get mad at you. But sabi ko, that's the risk you have to take. And right there and then, we told them that, ‘You know, whatever it is that you decide, we will be there. So, that's what I told Lani.

"That's why it's very painful sa akin na lahat ng mga naririnig ko, whether they were just rumors or whatever it was, very, very painful for me. I had no bad intentions. I wanted everything to be settled immediately. When Bong came back home and Jorge is in the States, ako pa nga ang humarap kay Bong. Ako ang nakipag-usap. The first thing I told him is, ‘Bong, pasensiya ka na. We didn't want it naman to happen.'

"Yun ang aking role from the start. Kaya ako na-hurt. Parang ako pa ang lumabas na, all of these, na parang after everything that I've done? Sabi ko, wala naman akong hiningi, e, except you know, I gave my time, I tried to help because I wanted to, and I was doing it for Vince. I didn't ask for anything in return," mahabang salaysay ni Patricia.

"Siguro," pagsang-ayon ni Patricia. "Because siguro they wanted to... I don't know how it all started. Pero siyempre, masakit sa akin because if only they knew how things were talaga the way before. That's why Jorge, yung mga tira sa kanya, okay na kay Jorge yun, e. Pero nung ako na ang tinira, siyempre si Jorge, nahiya na rin sa family ko, to me and to my kids so he had to pick up."

"Si Vince, ako, I felt din for Inah, actually. Siyempre babae ako, although I was never in that situation na ako yung makikisali sa mga in-laws. I couldn't imagine myself leaving with my in-laws ‘tapos siyempre you're starting. Siyempre mahirap. You hear all sorts of story.

"Sabi ko nga, we have naman an extra place. Although they know this, that when we found out that they were planning to get married already, we immediately added another room in our house in Forbes for them. I informed them na pina-child-proof ko na yung room and all that. We added a new parang wing for them.

"That's the initial plan, kasi syempre we were thinking siguro they needed our guidance, ganun. But then na-realize ko rin while we are going through all the process, of course. na-lay down na lahat. Kaya ang bahay namin, may ekstrang mga kuwarto. Na-realize namin that you know, I thought and I told my husband na maybe it would be best kung magsarili na lang muna sila. We'll just help them out. At least they can adjust."

"Ako naman, for Vince and Inah, I was willing to step aside whatever makuha namin for their happiness. Si Vince nga, as I said, you know I always tell him, ‘Like you're a son I never had.' You know what I mean? I'm very close to him

"Yung ten million? E, wala. It's there. The value naman of the condo will always be...it's nice, it's located in a strategic location in Salcedo, so the value is gonna be nice. Ayoko rin naman sila na matira na, you know, they're both used to a comfortable life ‘tapos bigla mo ilalagay kung saan. So I'm happy they're there. My parents live on the very top floor of the condo, so alam ako that they will be there. Ipinagbilin din namin sila sa parents ko that if they need anything, they can just go up," lahad niya.

"Yes, because he would really open up to me, cry to me and actually, in all fairness to Vince, so many times when he see me hurting, upset, he would be the first one to siya, ‘Tita, I'm really sorry.' You know, I kept a lot of his text message," kuwento niya habang pinipigilan ang pag-iyak.

"Actually, when we bought the house, we had it talagang renovated. So technically, it's about...ang iniwan na lang namin doon is the foundation. We had to redo the whole house because we wanted a modern house. But the location was perfect for us to improve more."

"Like I always tell him, may naririnig na naman kaming mga rason na maraming kulang sa condo. Kasi siyempre, concerned ako siyempre I don't want them naman na may kulang. So, tinawagan ko si Vince and I have his message na, ‘Tita, you know, that's not true. We're very, very comfortable. I'm very thankful.' And for me to hear him to say that, it's more than enough. So, para bang, okey na, kalma na naman ako."

"Actually, ang nangyari doon is we furnished and we did as much as we could for before the wedding para paglipat nila comfortable na sila. The refrigerator and the stove hinold namin, kasi we were thinking malay mo may magregalo, magkadoble-doble na naman. So the day of the wedding na walang nagregalo ng stove and fridge. The next day, dumating na yung order. I mean, yung kumpanya naman ng asawa ko, puwede naman kami magpa-deliver galing doon. Ganun ka-convenient. So, that's not a problem. Pina-hold lang namin.

"Kung ano ang gusto ni Inah, because siyempre first baby nila yun, and I don't think that there is anything wrong yung decision namin na 'yon. I think for me, I was just thinking what will make her happy as a mother, di ba, unang baby mo?

"No, in the wedding siyempre, I know and right from the start, I told Lani and Bong, I know that Vince's mother is going to play a role in the wedding. I wanted it to be her wedding with her son because Vince is just my stepson. Ako, alam ko naman. Siyempre naman may pinag-aralan naman ako. Alam ko kung saan ako.

What made them decide na um-attend ng wedding?

"Syempre naman, how can we not attend because of Vince? It's for the kids. Sina Bong and Lani went to the house. And si Vince, we had a long talk. And you know, we realized na once lang sila mag-aasawa. Kami, we're all adults. We can put all the difference on the side and do it for the kids," pagtatapos niya.
Read Next