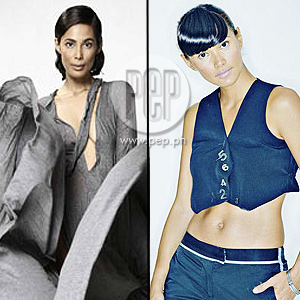 TV host-actress-model Angel Aquino (left) and former actress Tweetie de Leon (right) are two showbiz personalities who made it to Preview's Best Dressed for 2008. The list, according to Preview's chief editor, represents different kinds of style in fashion today.


From their "contradictory" dress codes in the past years—funky formal, neo-vintage, rock chic, and retro futuristic—Preview now asks their guests to wear "green" on their annual Best Dressed Party.

She explained in an interview with PEP (Philippine Entertainment Portal), "It stemmed from a longer report on going green that we did in the April issue this year. The main thesis of that is it's really for hard if you're really a fashion person to go green.

"The very essence of fashion goes against being green because you always want something new. So, it's always to consume, to buy more, more, 'tapos kapag old na siya, di ba, hanap ka ng something new or bigger, brighter. If you're totally into green it deflates your sources.

"We wanted to challenge our readers and our guests to apply that advocacy to their wardrobe or to their outfits for this year's best dressed."

In adapting the worldwide advocacy as their theme in this fashion event, Pauline further explained, "We figured that this [theme] is pretty much the oxymoron in itself. So, parang how you would translate green into your outfit for the ball. Are you going to use sustainable material—will you do it to carbon footprints, meaning everything local, hindi masyadong maaksaya; it traveled to get to you? Are you going to use it in terms of recycling?"

As part of the magazine's tradition, its July 2008 issue will feature once again ten prominent personalities in the fashion industry whom they consider the Best Dressed in 2008.

Pauline said that they also challenge these Best Dressed persons to Go Green, like the guests, in the upcoming ball.

PEP asked Pauline how Preview chose the Best Dressed this year. She said, "Actually, each of the girls that we have, we choose based on really their style. What we also wanna do is have a group of girls that really represent different kinds of styles."

Here are the 10 Best Dressed in 2008. Two of them are also well-known in the showbiz industry.

Angel Aquino. She will be the cover girl for Preview's July 2008 issue. Pauline narrated that, as the staff was reviewing their "Best Dressed" list, they found that the Us Girls host was not included. "‘Wala din si Angel. Oh, no!' Parang, ‘Hindi puwede!'" After all, Angel Aquino has been in the Best Dressed list in the past.

The fashion magazine editor says that Angel deserves to be on the list, "Primarily because of the easy, relaxed style of dressing."

This is exactly how Angel described her personal style in clothing. The 35-year-old TV host-model said in an interview with Preview, "[My personal style] is simple, easy, and basic with some effort to be stylish and updated."

Aside from US Girls,Angel hosts Studio 23's travel and food show titled Tablescapes. She will join Judy Ann Santos in the teleserye Humiling Ako sa Langit, which will start airing in September.

Tweetie De Leon-Gonzalez. In showbiz, she was popularly known as Faye in the early '90s via the defunct TV series Okay Ka Fairy Ko. But in the fashion world, she is hailed as the country's most famous supermodel.

In an interview with Preview, Tweetie confessed, "Actually, I never was into fashion. It just so happened that I made a career out of it—and in the process learned to appreciate style workmanship, and the creativity that goes into each piece."

The fashion model, who's also a jewel designer, became part of this year's Best Dressed because "Tweetie is more classical but is also on the sporty side, being the endorser of Nike," says Pauline.

Preview also wrote, "This woman can put such a polished, sophisticated flair to the simplest, most basic pieces."

How does she choose her outfits?

"I choose my outfit depending on the weather, and my mood," answered Tweetie. "I'm dressed casually, usually in a basic tee paired with slacks, played up with my favorite Ice jewelry."

Tweetie owns the jewelry shop called Ice, which has stores in Rustan's Essences in Makati, Shangri-La Plaza, and Alabang.

Belle (her more popular name) is the youngest among the chosen Best Dressed this year. Preview included her in the list because she represents the younger generation.

"And she also has a lot of stuff from her mom, which are recycled from the '70s, di ba? So, that's interesting, you know, if you put something vintage with something now—it makes her a very unique kind of look."

Belle admitted this when she was interviewed by Preview. She said, "I get a lot of hand-me-downs from my mom. She gave me this feathery top, which is like 25 years old—very delicate and daring. She tells me how fashionable she was during her time."

Katrina Lobregat. From celebrity figures, the next Best Dressed is a lady whose work is closely related to fashion. Katrina Lobregat is a fashion buyer for Rustan's Department Store's Resortwear, Ladies Imported Shoes and Bags, and soon, Children's High Street.

As Katrina herself told Preview, "I think I was made to dress for the tropics. I'm much more comfortable dressing up for warm, uncontrived, relaxed environment."

Katrina said that her influences on fashion came from her lolas, parents and even her sister. No wonder she is also into fashion design.

Ria Bolivar. Ria Bolivar is somehow different from the other Best Dressed personalities this year. While almost everyone likes to wear designer or branded clothes, this 24-year-old morena model candidly admits that she goes thrift-shopping.

Ria said that whenever she visits ukay-ukay, she always looks for vintage shoes and bags.

Where does she usually shop?

"I frequent ukay-ukay stores in Iloilo, bazaars, and tiny markets. I also go to Divisoria."

Solenn Heuseff. Like Katrina, this half-French, half-Filipina confessed that fashion is virtually in her blood. Both her grandmothers were sewers and pattern makers during their time.

This could have inspired the 23-year-old model/make-up artist to also try designing.

Solenn has already modeled for international brands like Christian Dior in Paris. Even it was only for a short period of time, Solenn thought that it was a good experience because, "I got to see how the buyers from different countries choose what'll be in their stores. It was really funny to see how styles can vary from one country to another."

Mai Kauffman. Last year, TV Patrol entertainment reporter Marie Lozano, who was pregnant at that time, made it to the 2007 Preview Best Dressed. Now, it's Mai Kauffmann, who is an interior designer by profession, but also designs her own line of quirky bags called Goddess. She is also a co-owner of a mid-century antiques and furniture shop called KARMA (Kauffman Auction Retro Modern Antiques).

"Parang every year, tsamba lang na there's always somebody pregnant in our choices. So it's always interesting to watch how you deal with the changing shape," explained Preview editor about having a pregnant woman in their list almost every year.

Pauline was amazed at how these pregnant women continue to be fashionistas.


Referring to Mai, she said, "But it's nice to see that she has not lost it. She likes loud colors, she'll pile things on, she's a maximalist in every sense of the word. So, talagang she'll do colored tights and then, printed colored tights, even when she's pregnant!"

Crystal Osamis. Aside from models, Preview also picked an aspiring designer, Crystal Osamis, to be included in this year's Best Dressed.

"What she does is she makes her own clothes," Pauline related to PEP. "Kasi makakamura naman talaga siya kung siya na lang ang gagawa, so she makes her clothes."

In an interview with Preview, Crystal said that she really enjoys creating dresses for other people. "It's a business I would want to take seriously. My personal style definitely reflects the clothes I make—I would never make a piece I wouldn't wear."

According to Pauline, Crystal is slowly making a name in the fashion industry. "She's been hitting the bazaars lately, trying to sell the stuff that she makes for herself because other people are like, ‘Ang ganda niyan, a. Sino ang gumawa?'" narrated Pauline.

Joyce Oreña. The next Best Dressed is a well-known fashionista who has gained popularity by wearing her personally designed jewelry. She sells some of her designs in her own accessories boutique, JÔ, located at the the Greenbelt 3 in Makati.

When it comes to clothing, Pauline said that Joyce is, "Very into designer [clothes] and the best European designers are really the stars of her wardrobe. Like, when you look at it, ‘Oh my God!'"

She added, "She's like the ‘who's who' of the best brands in the world. She wears these and then she mixes it up with her personal designs also to get the mix."

Where does she usually shop for these designer clothes? "In Manila, I shop at Greenbelt 3. Abroad, it's Milan, Rome, and Florence."

Anna Angara. Last but definitely not least is Anna Angara, a 37-year-old interior designer. This lady follows a certain discipline when it comes to fashion. Preview said, "She'll always opt for quality pieces regardless of price point. Secondly, she won't wear anything less than becoming—just for the sake of fashion."

Also, Anna told Preview, "I also stay in shape so I can wear as few items of clothing as possible!"

Get to know the fashionistas and their different styles in the latest issue of Preview coming out this July.