Richard Gomez still wishes to have another baby 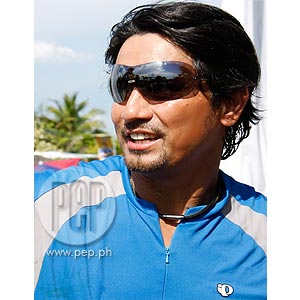 Actor Richard Gomez says that he and wife Lucy Torres are still working on having a second child. The couple's first child is daughter Juliana who is now seven years old.

In a short interview with Richard during the Kapusolympics held yesterday at the Golden Sunset Beach Resort in Calatagan, Batangas, he admitted that they have long been trying to have a another baby.

He continued, "We've been working on it, lately we've been trying to work up to have a new baby. Hopefully it will come soon, hopefully this year."

Richard, who is now in his early 40's was still positive that his 32-year-old wife could still bear a child. In fact, he said in jest, "Siguro at her age, kaya niya, three pa."

Does Richard wish for a boy since they already have Juliana?

He also related how he takes care of his daughter. "I am a very hands-on dad ever since Juliana was in the hospital, ever since she was a baby. In fact, she still sleeps in our room."

Richard was glad that despite their busy schedule, he and Lucy still have time to take care of Juliana. "It's good kasi 'yong schedule namin ni Lucy is alternate, so mayroong isa lagi sa bahay na maiiwan kay Juliana. It's not like two of us are working, then Juliana is alone at home. Laging may naiiwan kay Juliana. We were able to work out our schedule that way."

The former matinee idol is not yet open to the idea of Juliana joining showbiz. Juliana has appeared several times with her parents in billboards and print ads, and recently she joined her mother in a TV ad.

At the end of the interview, Richard left a message for all fathers: "I think, you know, you just have to give time to your children, especially if they're kids. Kasi yung pagkabata ng isang tao, once in a lifetime lang 'yan, e.

"You know, they'll experience it only once. Before you know it, they're big already. Hindi ba, ayaw mo naman magsisi na, ‘Siguro I should have spent more time.' We try to spend as much time as we can."