Heart Evangelista moving on fast after breakup with Jericho Rosales 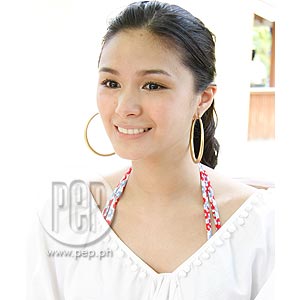 "I did not cry, not a tear," says young actress Heart Evangelista about the recent breakup with her boyfriend of three years, Jericho Rosales.

There was no trace of sadness in the eyes of Heart Evangelista when entertainment reporters spotted her hosting the Kapusolympics yesterday, June 17, at the Golden Sunset Beach Resort in Calatagan, Batangas.

It was only a month ago that Heart confirmed the split between her and Jericho Rosales, her boyfriend for three years. When she announced it, the young actress showed strength that somehow indicated her desire to quickly move on with her life.

So, like in her past interviews, Heart also tried to avoid questions about her breakup with Jericho and the alleged third party, Malaysian actress Carmen Soo. For the young actress, "It's done. It's finished."

She just assured the entertainment press that she's coping well. The new Kapuso star also said that instead of thinking about the breakup, she diverted her attention to her family and to her work.

SUPPORT FROM THE FAMILY. Heart is now patching things up with her parents, whom she slightly neglected during her relationship with Jericho.

"Well, I bond a lot with my parents nowadays. I'm making up for the time that was lost. You know, my dad is not getting any younger din. So, every day I'm with them. Kapag wala akong masyadong ginagawa, lagi nila akong pinupuntahan sa condo ko, I ask my mom to sleep over, ganun."

Heart also knew that when everything goes wrong she could always have her family on her side.

"I do believe na isang malaking bagay 'yan. It's the only command in the bible that has a promise. I mean, aside from that, siyempre I love my family and it's been a long time and I really wanna make up for certain things, especially now. And really, at the end of it all, your family is the only one that will stay to you."

ON CARMEN SOO. Last Sunday in The Buzz, Carmen denied the accusations that she was the person whom Heart was referring to as the third party in her relationship with Jericho. In fact, she even said, "I was puzzled and I felt victimized." (Click here to read full article )

Continue reading below ↓
When asked to comment on the statement of the Malaysian actress, Heart simply replied, "I have no comment about that."

She added, "I don't really care anymore, so it's done, really. It's not that I don't want to talk about it but [it's over] so we're all moving on."

Heart reiterated that she does not want to talk about her anymore, "Because she's not part of life and there's no need. It's done."

The young actress said that this is also why she does not want to talk about Jericho and their past relationship. She explained, "It doesn't need to be... I mean, why carry on when it's done, it's over. Next topic, di ba?"
Read Next
Read More Stories About
Heart Evangelista, Jericho Rosales, Carmen Soo, Asero