PEP EXCLUSIVE: Cheska Garcia will not invite Jennylyn Mercado to her wedding 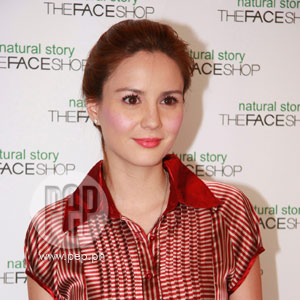 The Jennylyn versus Patrick issue has been going on for several months now, and each camp has been releasing contradicting statements. Who’s telling the truth? Cheska Garcia, the elder sister of Patrick, told PEP: “Be the better judge. You have spoken to me. I’m at the state right now where I’m all loose. I can be a b*tch to you right now but I choose not to. Because that’s the way I was brought up. I don&a
Cheska Garcia, who is a few months away from her wedding day, is brimming with excitement.

During the birthday party of Ruffa Gutierrez—held at the Blue Leaf Events Place in Fort Bonifacio, Taguig, last June 21—she revealed to PEP (Philippine Entertainment Portal) that she can’t wait to marry cager Douglas Kramer.

She’s on cloud nine, discussing her wedding plans for October 9 this year.

But in the course of the conversation, Cheska brought up one topic that has been unsettling her family for four months now: The issues confronting Patrick Garcia.

“My brother is a good guy,” Cheska said. “We were brought up with breeding, with class. You know, it’s not even class…I mean, each person can have class that they claim to have, but you know what, we are not like that.”

She continued, “My brother decided to be a businessman, is that gonna break him? We don’t have to blame ourselves. Pero alam mo, take it as it is. Pero kami, hindi kami maintriga. My brother is quiet.”

The Us Girls host was obviously disconcerted about the situation of her younger bro.

Last June 15, the 26-year old actor left for the States to pursue his studies and get away from all the “intrigues” surrounding him here. And most of these intrigues have to do with his relationship with Jennylyn Mercado, the mother of his first baby,.

Cheska told PEP, “My brother is in the U.S. and then, you know what, I’m very proud of my brother, because no matter how many times he’s been trampled on, stepped on, he’s never spoken anything [bad] about anybody.”

A LOOKBACK. The hubbub has been going on for four months now, but what exactly caused it? Jen and Patrick used to be so in love. They even contemplated having a civil wedding. But right after the “pregnancy” news erupted, things began turning sour. Why?

In the April 2008 issue of YES! magazine, the co-star of Yasmien Kurdi and JC De Vera in Babangon Ako’t Dudurugin Ka put the blame on the incessant media attention. While Patrick admitted that he and Jen would have small fights, he couldn’t understand why, instead of fixing things between them, his ex-girlfriend announced them on national TV.

He said, “If ever we’re going to fight, and she’s going to leak it out to people, especially if the story is not true—kumbaga, she’s just pushing me away.”


They parted ways last February 20. Patrick chose to keep mum, and eventually left Manila. But the negative publicity continued to hound him. Fans of Jennylyn accused him of being a “mama’s boy” and “unfit” to be the dad of the baby, and most recently, “irresponsible.”

Patrick’s mom and his sister, who had always come to his defense, were called “kunsintidor.”

On the other hand, the brouhaha took its toll on Jennylyn as well. Some showbiz fans called her “drama queen,” and worse, “publicity-greedy.”

AT PRESENT. Through this all, Cheska saw how her brother calmly took every attack that came his way.

"Honestly, when she announced it [pregnancy], I was the first person to find out about it. I was the first one. I told Jen, ‘Jen, don’t hesitate to call up my mom.’ My mom will know what to do. You know why? Coz my mom is not ‘yong baliw na mom para magpa-panic. My mom is steady, eh.”

Apparently, Cheska is tired of the ruckus and just wants it to stop.

And she may not have enunciated it, but she wants the mom of her first pamangkin to stop as well.

Cheska said, “She knows she was with my brother for one year and six months. She knows how our own family is. We’re not matapobre. We are never the matapobre. If we are, from the beginning of their relationship, we should have gone against it...

“We came from a good school, but we don’t look down on people. It is not the way it is. A lot of politicians and lot of businessmen who are successful right now don’t come from a good family. But they are who they are because they make the way that they are. They know what their work is. I don’t have to say bad things about Jen.”

Is she going to invite Jennylyn to her wedding?

“No,” she replied in a snap. “Would you invite a person who stepped on your brother a million times? No! No! Why should I?”

PEP saw Cheska’s different moods that night: excited and happy as a bride, upfront and upset about the issues, and most of all, protective as an ate.

Her parting shot, “We were born into keeping everything intact….We don’t have to prove to them, ‘Hey we’re like this, we’re like that.’ Wala kaming pakialam dun, we don’t care!”

At press time, PEP is trying to get Jennylyn’s reaction.