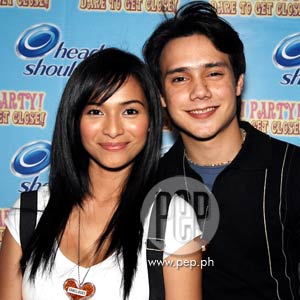 Patrick Garcia’s manager Arnold Vegafria (not in photo) revealed to Startalk that his ward was already in the United States with plans of pursuing something else aside from being an actor.

The past week held news about a mystery woman who supposedly tried to talk Jennylyn Mercado into giving birth in the U.S. Speculations are that the mystery woman known as Marilyn was only playing a role in what was supposedly a set up. Also, rumors suggest that Marilyn is a relative of Patrick Garcia's manager, Arnold Vegafria.

Arnold didn't know what happened after the family friend met up with Jennylyn. It was later revealed that the young actress, though thankful for the offer, refused the Good Samaritan by saying that she wanted the baby to be born here with Jennylyn's family and friends.

WHERE'S PATRICK GARCIA? Fans of Jennylyn didn't really believe the news that Patrick has left for the U.S. Arnold decided to end this issue by revealing Patrick's plans.

"He went to the States with the parents and then they're scouting for schools na puwede niyang pasukan. Break niya ngayon, and he just finished a soap opera, and then by October, he might start another one. So tamang-tama pagbalik niya by last week of September or October, eh gagawa na naman siya ng bagong soap and, at the same time, wedding ni Cheska [Garcia, Patrick's sister]."

LONG-TERM ISSUE . Many believe that the issue between Jennylyn and Patrick is far from over. Even when she gives birth, new issues may once again surround Patrick and Jennylyn.

Arnold can't help but share this theory with Startalk. He said, "Siguro kakabit na ng buhay nila ang bad publicity. Maybe this is the price of being an artist or celebrity. With regards to Patrick, kasi hindi maganda siguro yung pagkahiwalay nila. So up to now, nakatabig pa rin si Jennylyn kay Patrick, the same thing for Patrick to Jennlyn. So, I can't control that anymore."