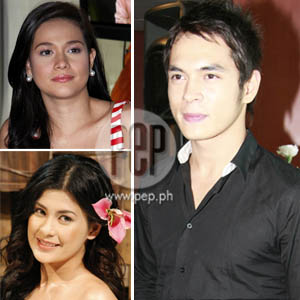 Young heartthrob Jake Cuenca was obviously flattered when informed that Bea Alonzo reportedly cited him as her current showbiz crush.

A self-confessed Bea and John Lloyd Cruz fan, Jake was very open in voicing out his deep admiration for the young actress. There were even reports that the two were spotted having dinner together somewhere in Alabang—a rumor that was neither confirmed nor denied by Jake.

By all indications, it seems both Bea and Jake feel mutual admiration for each other. Jake could only let out a quaint smile when that observation was brought up. But he also immediately dismissed the thought of pursuing Bea this early.

After all, he just came from a serious relationship with ex-girlfriend Roxanne Guinoo. Bea, on the other hand, just recently broke up with former flame Mico Palanca after trying their best to keep the relationship private.

Referring to Bea, Jake said, "She's a very good person so it's just really about friendship right now. Kasi nga, coming out from a big breakup and at the same time a long term relationship, I think friendship is the best way to go right now."

ROXANNE'S A GOOD CATCH. Because of Jake's openness when it comes to his feelings for Bea, Roxanne was said to be hurt, if not extremely jealous. The Ligaw Na Bulaklak lead star was also reportedly slighted when she witnessed how sweet and caring Jake was towards Bea during a party.

Roxanne, since her breakup with Jake was confirmed, has seen quite a turnout of admirers. Now single and unattached, some men are reportedly vying for Roxanne's attention, among them Kjwan frontman Marc Abaya.