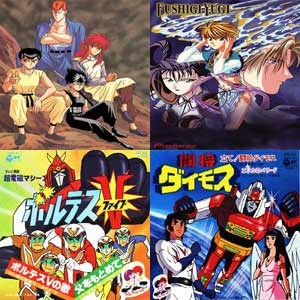 Kids and even "kids at heart" followed them from the start to the end of their stories. Now, PEP looks back at these animations and notes some similarities between them.

Cartoons in comic books, movies, and TV are said to be only for children. Yet even their elders, children at heart, are still fond of watching animations. At home everyone turns on to their favorite cartoon shows in the morning or even in the late afternoon.

A number of animation programs have already become a hit in the country. Some are based on classic stories such as Adventures of Tom Sawyer, Peter Pan, and A Little Princess; while the others are the Japanese animé (short for "animation") which have their roots in the Japanese Manga drawings.

Do you remember Sarah Crewe? Based on Frances Hodgson Burnett's novel, A Little Princess, the story was about the young daughter of a wealthy British family in India, who attended an all-girl's boarding school in London. Tragically, Sarah's father died and her family went bankrupt. Miss Minchin, the head mistress of the school, took advantage of the poor orphan's plight. The cruel Miss Minchin exploited Sarah by making her the school's cleaning maid. Sarah lived in misery.

How about Cedie (or Cedric)? He was the American boy in Burnett's novel Little Lord Fauntleroy, who turned out to be the sole heir to a wealthy British earldom. He and his mother left America and resided in Cedie's ancestral castle. The boy's grandfather, the Earl of the Dorincourt Castle, wanted to teach young Cedric to become an aristocrat. But later on the Earl learned that his grandson would become a better Earl than himself—compassionate and caring towards their poverty—stricken subjects.

Following the fate of these young children really touched the heart of the televiewers. Their stories taught a lot of things to the kids who were glued to television every morning. Princess Sarah and Lord Fauntleroy were such a hit that these were adapted in the local movies Sarah, Ang Munting Princesa (1995)and Cedie, Ang Munting Prinsipe (1996).

In Munting Princesa, the moviegoers discovered the acting skills of then child stars Camille Prats and Angelica Panganiban. Ang Munting Prinsipe showed the kindness that each child should have through the character of the former child actor Tom Taus.

Voltes V was one of the most famous robot-inspired Japanese animé shown in the country. This predecessor of Combattler V, which was first part of the Robot Romance Trilogy, was first shown in the late '70s, dubbed in English. After more than a decade, its re-runs were shown on television and dubbed in Pilipino.

Following Combattler V and Voltes V, was the third installment of the "romantic trilogy called Daimos. Unlike Voltes V, the robot Daimos only had a sole pilot, Richard Hartfort. The robot had the ability to mimic the movement of its pilot. Since Richard was a karate black-belt champion, he was able to make Daimos wield karate moves in fighting mecha soldiers. This army was deployed by Admiral Richter of the planet Brahm to destroy planet earth's defenses.

Daimos's love story was also followed by its hopeless romantic viewers. Richard fell in love with Erika, who turned out to be the sister of the evil Richter.

Children are commonly afraid of monsters but when Pokémon and Digimon were shown on television, the kids became fascinated with monsters that fought evil forces.

Pokémon (or pocket monster) originated from the most successful video game of Nintendo with the same title. Its story was about a Pokémon trainer named Ash whose goal was to collect all the available Pokémon species found in a certain area. He trained those collected pocket monsters to fight the creatures that were owned by other trainers and he became the ultimate Pokémon trainer.

The show popularized the yellow electric monster called Pikachu, who was the first pocket monster Ash and was regarded as the official mascot of Pokémon. There were also Charmander, Squirtle, and Balbasur.

While Pokémon became a hit in GMA-7, ABS-CBN was able to get Digimon to compete with the success of Pokémon. Unlike the rival network's show, Digimon followed the natural cycle of life. The trainers started with a baby Digimon, then they would train it, evolve it, and take good care of it before setting it up for a battle with other digimon.

Basketball and boxing are two of the most popular spectacle sports for Pinoys. And so, the animations Slam Dunk and Baki the Grappler landed a spot in the afternoon block of GMA-7.

Basketball fans witnessed how Hanamichi Sakuragi developed from a character who knew nothing about basketball to a superstar cager. He focused on learning this sport out of love for Haruko Akagi, who discovered his potential in basketball.

Sakuragi joined the team of Shohoku, which was composed of: Kaede Rukawa, his rival on the court and in love, being the "girl magnet" of the team; Hisashi Mitsui, the former MVP; Ryota Miyagi, the short but fast player of the team; and Takenori Akagi, elder brother of Haruko and team captain of Shohoku.

On the other hand, Baki was about the young fighter named Baki Hanma whose dream was to follow his father Yujiro's footsteps and become the strongest fighter in the world. He developed his body through rigorous training and continuous fighting to achieve this goal.

Doraemon and Mojacko were two animé characters, who not only made televiewers laugh but also taught some lessons.

Doraemonwas a cat-like robot with human intelligence. He had a large pouch-like compartment on his stomach, which contained many gadgets from the future. He was sent for by Nobita to help him in his struggle in life by using his futuristic gadgets.

In March 2008, according to Wikipedia, Japan's Foreign Ministry appointed Doreamon as the nation's first animé ambassador to help people in other countries understand Japanese animé better and to deepen the interest in Japanese culture.

Mojacko was a furry, rotund alien from the planet called Moja-Moja. He came to Earth when his spaceship malfunctioned awfully while he was exploring the cosmos. He and his robot sidekick Dono befriended a human named Surao and stayed at his place while their spaceship was being fixed. Later on, Mojacko's siblings Mojaru and Mojari joined them; while his enemy Momonja stayed with Surao's arch-enemy, Wutan. Both groups had all kinds of adventure in their search for the greatest treasure in the universe.

The list would not be complete without the hit series titled Ghost Fighter (Yu Yu Hakusho) and Fushigi Yugi. The main characters of these two animations were sent to a different dimensions and got involved in fighting evil.

Ghost Fighter was about a delinquent young man named Eugene (Yusuke Urameshi), who died after trying to save a littlechildfrom a speeding car. However, due to an unexpected twist of fate, Eugene was assigned to become a detective for the Spirit World to investigate demon cases in the human world.

With his spiritual abilities, Eugene led his team-composed of Dennis (Kurama) of the spirit world, Vincent (Hiei) of the demon world, and Alfred (Kuwabara) of the human world-to the Dark Tournament to fight off demons and humans that aim to rule these three worlds.

Fushigi Yugi was a about a lady named Miaka who ended up in The Four Universes of the Four Godsafter she and her friend Yui read the book with that title. She discovered that she was the Priestess of Suzaku. To fulfill this, gathered all seven guardians—Tamahome, Hotohori, Nuriko, Chichiri, Tasuki, Mitsukake, and Chiriko—to summon the god Suzaku.

Unfortunately, the emperor of Kutou manipulated Yui to become the Priestess of Seiryuu. This meant that she had to work against her friend Miaka. Both ladies brought together their own warriors to fight for the chance to be granted three wishes by the gods whom they hoped to summon.

Ghost Fighter (Yu Yu Hakusho) and Fushigi Yugi were two of the animés that gained a high rating in primetime block. In fact, Ghost Fighter was such a hit that it was shown several times in the GMA Network.

These are just few of the animations that Pinoys followed avidly in the past. If you feel nostalgic, feel free to add more cartoons that you enjoyed during your childhood days.