Ogie and Regine in their third U.S. trip! 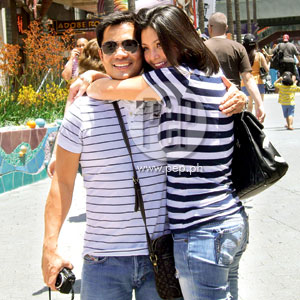 Singing sweethearts Regine Velasquez and Ogie Alcasid were together again in the U.S. last June, for the North American concert tour of Love to Laugh. The show had Ai-Ai delas Alas and Martin Nievera sharing top billing at some of the tour stops.


For Regine and Ogie, it was the third time to be together on a U.S. concert tour. The first time was 2000, when Ogie was a guest in Regine’s tour of New York and san Francisco. The second was in April-May of 2004 for The Songbird and the Songwriter. The third was in May-June of 2006, when they brought the show Forever After not just to the U.S. but also to London.


In all, the Love to Laugh show toured eight cities—New York, Chicago, Los Angeles, and San Francisco in the United States; and Calgary, Vancouver, Edmonton, and Winnipeg in Canada.

Love to Laugh had the best public reception ever at the U.S. and Canada shows. “Wow, fantastic, fantastic!” says Ogie. The biggest venue was in San Francisco, but the bigger crowd, Ogie recalls, was the one in L.A.


Ogie acknowledges the fact that his revelation about his relationship with Regine had something to do with the concert’s double success.


Even working tours, however, have days off. And Ogie and Regine made sure they got enough time to roam around. Leo Dominguez, Ogie’s manager, says the concert group had the most number of days off in L.A. and San Francisco. “Like, noong namasyal sila sa Universal Studios, talagang buong araw ’yon,” says Leo. “Plus, ipinasyal na nila pati si Lani [Sarong], pinsan ni Regine, na first time nakapunta sa U.S.”


Here are some exclusive photos of the couple’s day off in L.A.