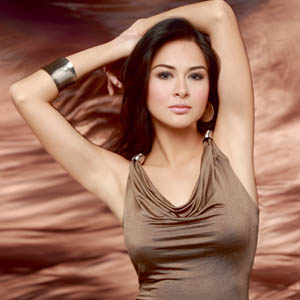 Marian Rivera’s drawing power as a product endorser continues to grow. Only recently, the young actress signed up as the new endorser of Facial Care Centre.

Marian Rivera's victory in the recently concluded FHM Philippines 100 Sexiest Women for 2008 only affirms her current status as one of the country's top young stars of today. Buoyed by the success of Marimar, a local adaptation of the popular Mexican telenovela, Marian instantly developed a huge following which grew even more after she bagged the role of the legendary Pinoy mermaid Dyesebel.

Add to that the numerous endorsements she gained following the success of her television projects. Just recently, the 23-year-old actress also jumped into the ever-growing list of celebrities who are endorsing firms in the beauty and cosmetics business.

In a previous interview, the Filipino-Spanish beauty said that her decision to sign up and avail of the service was largely because of her problem with unwanted hair.

"Balbon talaga ako," she shared smiling. She used to shave and apply wax to remove the unwanted fuzz but totally gave up on the two methods that were painful and inconvenient. The LaserLight method, according to Marian, is more practical, effective, and totally painless.

Incidentally, Marian is currently being wooed by FHM Philippines to grace its cover after she bagged the prestigious Sexiest Woman plum for 2008. FHM editor Allan Madrilejos, along with the readers, are now hoping for Marian to give in to the public demand.

"We're very open when it comes to negotiations. Ganun naman talaga kami e," said Allan to PEP (Philippine Entertainment Portal) during the presscon of the event held yesterday, July 17 at the World Trade Center in Pasay City. Allan was pertaining to the talks between the magazine and Marian's camp as to how far the young actress could go come pictorial time.

As revealed by the amiable editor-in-chief, Marian has been on the radar of FHM even before her once quiet career took a continental shift. Allan revealed that they tried in vain to get Marian to grace the cover in time for the launching of Marimar in August of 2007.