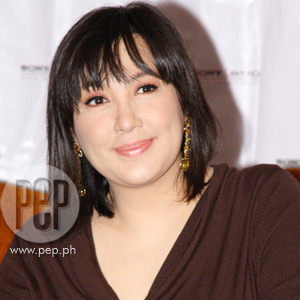 Even if she has already performed before thousands of concert goers, the Megastar admits she still gets nervous every time she goes on stage.

When the Megastar entered the Ruby Grand Ballroom of Holiday Inn Galleria this afternoon, July 25—for the presscon of her upcoming concert—she was all smiles and even greeted some people she knew with a warm hug.

Sharon is all set to mount her biggest concert titled "Megathirty" on August 8 at the Araneta Coliseum. Her guests include Mr. Pure Energy Gary Valenciano, Concert King Martin Nievera, and her very own daughter KC Concepcion.

Her two-hour concert will take you down the memory lane—from the time she released her first hit single "Mr. Dj," to the movies that catapulted her to stardom, the awards she bagged, the friends she made, the leading men she worked with, until the time she earned the Megastar title. "The songs were rearranged fantastically," shared Sharon.

One of the much-anticipated portions will be her duet with KC. "We have a number together," she said with pride, and described it as "very touching."

It will also be a night of thanks. The multi-awarded actress says her career has been by "God's hands." She added, "Everything...I can't claim to be the mastermind of my longevity."

She has been successful as a singer-actress-TV host-endorser, and she feels so blessed that she can just choose her projects.

"As of yesterday [July 24], my next is gonna be a love story with Star Cinema." And her leading man will be none other than Richard Gomez.

The Megastar also announced her upcoming project with Star for All Seasons Vilma Santos, her wish to do a movie with Comedy King Dolphy, and "one more with Robin [Padilla]." She said with a laugh, "Robins treats me like a princess. Kahit ganun siya sa lahat."

After these projects, "I can retire," declared Sharon. "He probably wants me to take it elsewhere. You can't be wallowing in all these successes for 30 years, and still not be believing in it."

Leaving the business that has loved her for so many years would mean having more time to do the role she enjoys most: Being a mother. "I'm crazy about my girls. I love being a mommy."

Aside from her girls, the 42-year-old mom also wants to finish school. "I just want to keep on learning and learning."

On the night of her concert, which will be directed by Rowell Santiago (stage direction) and Louie Ocampo (musical direction), Sharon would love to see the people who put her to where she is now. Her regret though is that her dad will not be part of the audience. "He'll be very proud of me," she mused.

When asked about the "downs" in her life, Sharon quickly replied: "Yung downs, hindi ko na maalala. Wala nang meaning..." They have been overruled by the happiness in her heart, peace of mind, and gratitude for the people who have been there for her.

All the rewards she has reaped and enjoyed for 30 years have been due to the goodness of her heart. She quipped, "I'm just really a good person."