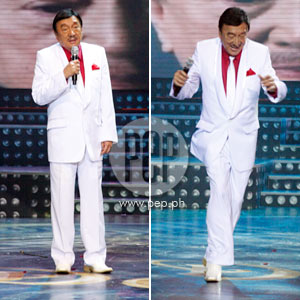 Dolphy showcases two of his known talents: storytelling and dancing. The latter was a portion shared with Willie Revillame (not in photo), who described Dolphy this way: "Parang kanin at ulam, binubusog ang mga Pilipino."

The showbiz career of Rodolfo Vera Quizon is like a roller coaster ride, with so many unexpected twists, bumps, and turns.

From being Golay, he rose to become Dolphy in the world of showbiz. From a "Japanese ekstra na dulo lang ng riple ang nakita," he went on to star in almost 200 movies.

In a show titled The King of Comedy: Dolphy at 80—ABS-CBN pays tribute to the country's one and only Comedy King, and relives his colorful career as comedian.

THE SHOW HIGHLIGHTS. With Dolphy, his family, and a little over 1,000 stars from different eras, ABS-CBN executives, and press people—the Kapamilya stars sang, danced, and had the crowd roaring with laughter.

The early part of the show was an audio-visual presentation recalling the notable movies he made. Dolphy was the storyteller himself. He began with Sampaguita Pictures' Sa Isang Sulyap Mo, Tita (1953), to his first comic team-up with Panchito in Kalabog en Bosyo (1959), to his famous gay role in Pacifica Falaypay (1969), to Omeng Satanasia (1977)—the movie which earned him his first and only FAMAS Best Actor trophy, to multi-sequeled John en Marsha, and Black Magic (1987), which he described as "malakas."

The leading ladies of Mang Pidol, another popular name of Dolphy, were also remembered, with the Kapamilya singers—such as Christian Bautista, Sam Milby, Mark Bautista, Richard Poon, and Erik Santos—singing some oldies songs. There was a slight stir among the audience when the photos of Pilar Pilapil, Alma Moreno, and Zsa-Zsa Padilla were shown.

Of course, his career would not be complete without his dancing shoes. Nova Villa, who introduced this portion with Bayani Agbayani, said: "Kahit saang sayaw ng buhay tayo makarating, ikaw at ang Pinoy ang laging magka-partner."

Vhong Navarro imitated Dolphy's famous dance moves in his movies, plus, it showed the superb dancing skills of Pokwang and other talents of the Kapamilya talents. The most pleasant surprise here was the return of Dick and Carmi's tandem on stage.

Dolphy's gay roles were brought back to life again in a very energetic number performed by Comedy Queen Ai-Ai delas Alas—with Chokoleit, Vice Ganda, and Pooh Pacquiao as his chuwariwap.

SPECIAL NUMBERS. Sharon Cuneta belted out "Thanks to You," and expressed her ardent wish to have a project with Dolphy. "My career and my life will not be complete if I will not be given the honor of having a movie with you," the Megastar said.

The British-Filipino kid Charlie Green mesmerized and wowed the crowd with his angelic and clear voice. After finishing his song, the people screamed "more!"

The taped duet moment with Vic Sotto was indeed a double treat. The King and Prince of Comedy sang four songs and talked about courting ladies and winning them back. Vic also said his wish for Dolphy: "Sana mag-asawa ka na." Mang Pidol, on the other hand, advised Vic to make sure his relationship with Pia Guanio would reach, if not surpass, 20 years—which is the number of years Dolphy and Zsa Zsa have been together as a couple. "Paabutin mo. Please lang," said the Comedy King.

The finale with Willie Revillame was entertaining. He dared Dolphy to engage in a chant and dance showdown with him. The King of Dolphy was so cool about it and even gave the audience a sample of da moves. One comment from Dolphy that generated cheers was: "Kelan kayo magbabati ni Joey [de Leon]?"

"Alam niyo po, ang ABS-CBN and Mang Dolphy have been together for many, many years, we started back in early '60s, so over 50 years na ang relationship ng ABS-CBN with Mang Dolphy. Siguro po it's the longest relationship either of us spend with anyone...not in the other one."

DOLPHY'S MESSAGE. Dolphy was brimming with pride and gratitude that night. "Maraming salamat at pinaabot ako ng otsenta," he began. Then he went on to recall his humble beginnings and thanked the people who figured greatly in his showbiz career.

1. Pugo and Tugo, who became his mentors.

2. Pancho Magalona and Dr. Jose "doc" Perez, who made him "Dolphy."

3. Erap and Ronnie (the late Fernando Poe Jr.), who became his allies in improving the industry.

6. Susan Roces, who, according to Dolphy, brought in box-office successes to Dolphy's film outfit RVQ Productions.

Unfortunately, Zsa Zsa is currently out of the country, so she was not physically present during the show. In her taped message, she thanked he rpartner for the "wonderful 20 years," and joked: "Sabi mo raw, ang mga babae sa buhay mo ay from A-Z. Salamat naman at ako ay Z."

Randy David—a journalist, television show host, and sociologist—described Dolphy as the "Chaplin of kulturang Pilipino." And for Dolphy's millions of fans, he is the embodiment of Pinoy comedy.

We all agree. Cheers to a longer and funnier journey with the Comedy King!