Angelica Panganiban On Being Fierce and Fearless 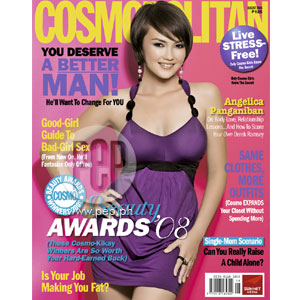 Angelica Panganiban is back on Cosmopolitan magazine to talk about love, life and beyond.

Angelica Panganiban has always been captivating.

Angel-faced and innocent, she captures the hearts of countless admirers. Tough and level-headed, she inspires fellow Cosmo women to endure the worst of trials. Most would crumble from the challenges she's been forced to face—from the alleged Angelica-Carlo-Camille love triangle, to the discriminating photos of her that circulated, and now, to rumors of trouble in love paradise.

When she filmed Laurice Guillen's Santa Santita, she felt that she couldn't do her character justice. Even so, she forged on, "Natakot ako sobra...Pero, nilabanan ko yun." It turned out that the film would be her lucky break. Succeeding the release of the movie, she's been a constant in FHM's 100 Sexiest Women of the World.

Then a situation of serious magnitude pushed her to her limit when private photos made its way into public domain. "Gumuho mundo ko nun. Hindi ko talaga alam kung paano ako makaka-recover," she laments. What upset her most about the incident is the knowledge that her loved ones were deeply affected too, "Kapag nasasaktan na mga mahal ko sa buhay...makakasapak talaga ako ng tao."

But even in the toughest situations, Angelica isn't easily swayed. Even at her lowest moment, she holds her head up high. In the best possible advice she could give to other women, she dishes, "Lagi mo dapat unahin sarili mo at kung paano mo ma-po-proteksyunan sarili mo."

Ultimately, the child star is now a grown-up woman who has learned to be responsible for her heart and to love herself for who she is. Read more about her love and life realizations in the August issue of Cosmopolitan magazine.

The verdict is out! The Cosmo Beauty Awards reveals the best of the best in a special 11-page spread that answers every Cosmo chick's burning beauty questions. Plus, one lucky reader can win all the beauty products featured in this year's Cosmo Beauty Awards. To find out how to win, grab your copy of the August issue of Cosmopolitan Magazine, featuring Angelica Panganiban on the cover, now available in magazine stands, bookstores, and supermarkets nationwide at P125 per copy.