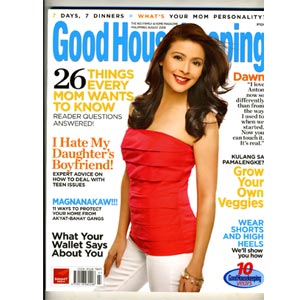 One person lived in the political arena while the other person bloomed and flourished in the world of show business filled with pictorials and tapings. At one point, these two persons met and exchanged vows to be together for as long as they live.


It has been a decade now since Dawn Zulueta and her husband, Davao del Norte congressman Anton Lagdameo, entered married life.

Good Housekeeping's issue for August 2008 features Dawn and how she has handled the pressure of being a career woman, a mother and a wife all at the same time. The actress shares her experiences and the lessons that she has learned from her marriage. Dawn also expresses how much she appreciates her husband, and how she gets to love him deeper than before.


Dawn and Anton started out as friends even before they began dating. She stressed that a solid friendship is a very good foundation for any relationship. But, she says: "Don't forget to be lovers at the same time. Sometimes, you're so stuck with that notion that you have to be friends; you forget that you don't get your hot oil anymore, you don't primp up anymore, you don't doll yourself up anymore. Because anyway, it's cool with him.

When it comes to lovers' quarrels, Dawn admits that she and her husband have had their share of conflicts gien both of them are hardheaded about the way some things should be done. But she believes that arguments in a relationship are normal.


"You have to learn to create healthy space and time," she says. "Not too much, but you have to know what is just right. I'm not a believer of ‘don't let the sun go down until you've patched up' or ‘don't go to bed early.' It's not true. For me, there are some things that take time. But in the essence, I think what it means is, don't let it take too long until you talk and resolve, kasi there is a point that might be too late, e. Then it becomes a bigger problem. So just allow yourself to cool off."


Different experiences with her husband have helped Dawn reach a new level of maturity, and she considers problems as tests that toughen their relationship. She tells GH, "there really comes a point in your partnership that you're tested. Maybe it had something to do with the fact that we were trying so hard to get pregnant, and it was difficult...and I'm so glad we got over that. It took a lot of praying, a lot of counseling from people we trust, like friends and relatives."

Keeping a relationship strong requires love and hard work. Fortunately for Dawn and Anton, their love have become stronger over the years. "There's now a deeper appreciation for each other and a deeper understanding of each other. It's like you discover a new way to love each other. I love him now so differently from the way I used to when we started. Now, it's something more tangible," she observes.

Good Housekeeping is now available in all leading bookstores and magazine stands nationwide at only P100 per copy.