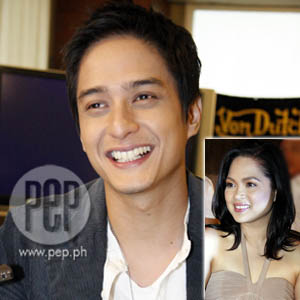 With his scheduled Argentina trip, Pinoy Fear Factor host Ryan Agoncillo said that he will miss girlfriend Judy Ann Santos. “Absence makes the heart grow fonder,” quipped the good-looking actor-host when asked if there’s any fear on his part that the long absence might weaken his relationship with Juday.

Bagging the hosting job for Pinoy Fear Factor was totally unexpected, according to Ryan Agoncillo. Last Friday, August 1, the actor-host confessed how he emerged from the audition room a few months back feeling disheartened.

Ryan admitted feeling rusty after months of inactivity as a host. His last TV hosting was two years ago in the maiden season of Philippine Idol, which at the time was still with ABC-5.

Ryan is an avid viewer of the U.S. version of Fear Factor. Knowing that he was vying to be the local counterpart of American host Joe Rogan added extra pressure on his shoulders. The condition during the audition was also different, compared to his experience in Philippine Idol.

"When I auditioned for Philippine Idol, I didn't have time to have those thoughts, hindi ako kinabahan kasi wala akong time kabahan. E, ito, naghintay ako ng mga 30 minutes habang sine-set up 'tapos dalawang oras ‘yong audition, so mahaba. So all of these thoughts were in my head na I felt that I totally screwed up."

The audition as a host was less extreme as compared to the contestants, although Ryan also went through minor tests just to give him a feel of the show's concept.

ON THEIR OWN. Despite nursing some doubts, Ryan was able to impress the audition master and the people behind Endemol, the Netherlands-based production outfit that owns Fear Factor's franchise.

Ryan, along with the contestants and production team, will fly to Buenos Aires for over a month to tape all the episodes. ABS-CBN hopes to launch the show this coming September.

"One month ‘yong actual contest period, pero we'll have a few days before that pa, e, na immersion pa," mentioned Ryan, who lost a considerable amount of weight through his frequent jogging.

The possibility of fiancée Judy Ann Santos visiting him while in South America is remote, mainly because of distance and time constraints.

"I doubt it," replied Ryan, "not with her schedule and the amount of time that it takes to get to Argentina."

Based on the couple's computation: "Even if she takes a week off from work, travel to Argentina takes two days and travel back is two days so that leaves her with three solid days to stay in Argentina, which I don't think really is worth the hassle."

WEDDING PLANS. Now that they are officially engaged, the public is now raring to know the couple's exact wedding date.

They're still in the afterglow of their engagement and both are cautious not to discuss the next giant step.

Some people are skeptical about long engagements but Ryan remains unfazed, saying, "It really depends on the couple and not the amount of time you spend engaged together."

Even the emphasis on the so-called "financial readiness" doesn't hold much water according to Ryan. He stressed that marriage all boils down to the couple's attitude and willingness to uphold the vow they make before God.