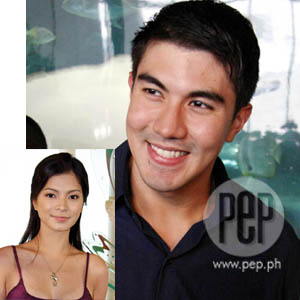 Luis Manzano says he would rather not divulge the state of his relationship right now with Angel Locsin (inset).

During the general press conference of Dyosa at the Manila Ocean Park yesterday, August 4, Luis Manzano was asked by the press regarding his rumored girlfriend Angel Locsin.

He tells PEP (Philippine Entertainment Portal), "We're okay, we still go out, and we're very, very, very happy. The key word is that it's not a necessity. Because the more I answer, the more I will sound showbiz. I want to give people due respect, ayokong magpaikot ng tao.

"There is no need for me to answer, wala namang buhay na nakataya," he says.

At this point, Luis revealed that he has no plans of being paired with the new Kapamilya star. "We're not working together and we have no plans of working together. We believe we have our own thing...siguro ‘pag episodic. Pero ‘pag love team sa teleserye, ayaw namin kasi mas lalong mapapakialaman kung ano man ang meron kami."

Is Angel special to him right now? "Yes, definitely," he answers.

How special is Angel to him? "What you see is what you get. Nakikita naman ng tao yun."

In 2007, it was reported that Luis chose Anne Curtis as one of the beneficiaries for his life insurance, aside from naming his immediate family members. Does he see himself naming Angel Locsin as his beneficiary, similar to what he did for Anne?

How does he feel about the intrigues being faced by Angel now?

"In showbiz and politics, there is no right thing. Even if you do the right thing, people will judge you. Kahit gaano ka pa kabait, meron at merong magsasabi ng masama sa ‘yo. Kahit anong kabutihan ang ipakita mo, meron pa rin."

Angel reportedly had a disagreement with Claudine Barretto in a salon last July 4, which prompted ABS-CBN executives to step in and facilitate a meeting with both Kapamilya stars.

How did Angel handle these negative criticisms? "She has handled it unbelievably well. Of course, it gets to her pero sa laki ng issue na binabato sa kanya, she's smiling...basta ang importante sa kanya ay magtrabaho."

Luis says that he knows what is the truth behind these issues and he is ready to support Angel wholeheartedly. "Alam ko ang totoo and I think 99 percent ng mga kilala niya, alam rin ang totoo. She gets upset but that doesn't really affect who she is. Hindi naman talaga siya ganun."

Did Angel cry over this issue? "There was one time that she got teary-eyed. Let's leave it at that. They chose to keep that issue between them," said Luis.

Luis is one of the leading men of Anne Curtis in ABS-CBN's fantaserye Dyosa, which will air starting August 11.
Read Next
Read More Stories About
Luis Manzano, Angel Locsin
Post a Comment
Featured
Latest Stories
Trending in Summit Media Network