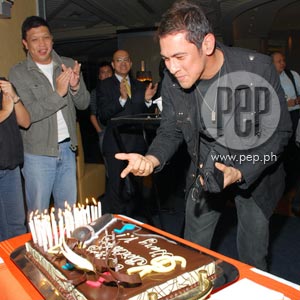 Caught completely off-guard, Mr. Pure Energy Gary Valenciano was treated to a surprise birthday party by Star Records last night, August 6, at the Conway’s Bar of the Makati Shangri-La Hotel. “I really don’t know what to say,” gushed Gary after discovering the surprise. “But well, it’s really nice to be surprised once in a while,” he said, beaming.

Last night, August 6, Gary Valenciano was all set to call it a day. After wrapping up a dinner date with wife Angeli Pangilinan to celebrate his 44th birthday, the singer known for his energetic performances was ready to relax and simply chill out at home.

But Angeli had other things in mind. Coaxing her husband to accompany her to the Conway's Bar inside the Makati Shangri-La Hotel, Gary willingly tagged along expecting to meet a few friends for a small chat.

The moment the couple stepped inside Conway's, Gary was puzzled to discover the lights shut down while a house band was busy playing Queen's classic crowd-pleaser "Another One Bites The Dust."

PLEASANTLY SURPRISED. As the camera lights started flashing, the house band quickly shifted from a rock tune to a rendition of "Happy Birthday." A blushing Gary could only let out a huge smile as he saw the chocolate birthday cake adorned with the words: "Happy Birthday Gary V!"

"I don't know what to say, talagang hindi pa ako handa," Gary told the reporters who immediately swarmed around him immediately after blowing his birthday candles.

At 44, Gary said he simply couldn't ask for more, although he stressed that his career as a singer and performer is far from over.

Incidentally, the party prepared by Star Records also coincides with the 24th wedding anniversary of Angeli and Gary. Gary said they're planning to leave the country this coming September to unwind before returning home to prepare for his upcoming major concert on November.

"May plano kami," he excitedly said, "but not for now, medyo mga September pa, for the first time pupunta kami sa isang cruise."

Speaking endearingly about his wife—who is painted most of the time in a negative light brought by her strict policies when it comes to her talents—Gary agreed with the notion shared by some that Angeli is simply "misunderstood."

More than being his manager and wife, Angeli is his best friend. "She's my friend, she's my lover, she's my wife," he quipped.

As for his success and longetivity in the entertainment business, Gary credited his wife for guiding his career and saving his life throughout his bout with diabetes.

The process of completing the tribute album was not easy. Aside from painstakingly gathering 25 artists to grace the project, Star Records also had to negotiate with Universal Records to gain permission to re-record the songs. Most of the songs found in Gary's catalogue are owned by Manila Genesis.

Gary admitted feeling touched when Star Records informed him about the project to mark his 25 years in the industry.

"I really, really want to thank, of course, Universal Records na nagbigay sa akin ng napakaraming magagandang pagkakataon na mag-record ng awitin na naging popular at naging espesyal sa puso ng tao. And I'm thankful to Star Records na out of their own heart they said ‘Can we do something for you? After all, you've been with ABS [CBN] for so many years.' Sabi ko, ‘Sige let's see what they can do.' So kumuha sila ng 25 artists para mag-record sa mga kanta, ‘yong mga na-release ko in the past 25 years."

Gary has yet to hear the cover versions and he would rather leave it at that as of the moment to heighten his excitement.

He was completely hands-off during the making of the album. Gary stressed that the thought of an artist meddling in a tribute project designed for him or her is simply ridiculous. Although the idea was brought up to him by the label; probably thinking that he has some suggestions that would make the endeavor much better as envisioned.

The initial feedback relayed to him by those in charge of the album was very encouraging. He mentioned the names of Erik Santos and Kuh Ledesma as two of the names garnering rave reviews this early for their respective renditions.

Having experienced the ups and downs of the entertainment business, Gary relayed his heart's desire to serve as a mentor to the upcoming Pinoy singers of today.

"Para sa akin ang role ko hindi lang para kumanta. My role is also to help out others especially ‘yong mga bago sa industriya. You have young people like Charice, you have young people like Charlie Green. I mean these guys, these young people have so much in store for them and makakaengkuwentro din ito ng mga problema, may mga ups and downs rin sa career and I'd like to help," Gary said in closing.
Read Next
Read More Stories About
Gary Valenciano, Angeli Pangilinan-Valenciano, Star Records