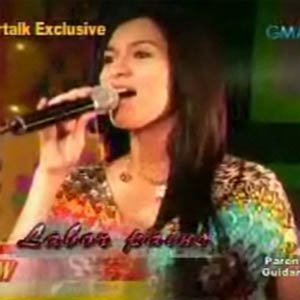 Young actress Jennylyn Mercado is ready to give birth any time now. But even in her delicate condition, she still managed to guest in the morning variety show SiS last Thursday, August 7, where Startalk caught up with her.

When Jennylyn appeared on SiS, she was surprised by her closest friends and StarStruck batchmates, including former boyfriend Mark Herras. Rumor has it that Mark is going to call Jennylyn's baby with Patrick Garcia "Bad Boy"—a title Mark himself carries as the "Bad Boy of the Dance Floor."

For Mark, there are other ways of giving support, aside from the financial aspect. According to the young actor, he and his friends can act as fathers to the baby since Jennylyn and Patrick are not in good terms.

Mark also said that he is willing to do a love-team comeback with Jennylyn for their fans.

JEN'S FINANCIAL PROBLEMS? Some say that Jennlyn is in a difficult financial situation, which her mom Mrs. Lydia Mercado denied.

As luck would have it for Jennylyn, the Kapuso Network offered her a P1 million-peso contract. Would Jen accept the offer?

"I think that's too personal to talk about," she answered. "Parang ayokong...huwag siguro. Kasi ako, wala din ako alam [about the contract], e.