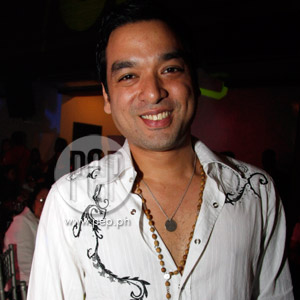 "I want to see him nga in a commercial, e. Marami akong gusto para sa kanya. I want him to be a rockstar, kahit ano, kahit ano, I will support him," says Bernard Palanca of his son with actress Meryll Soriano, Elijah.

"Matagal na rin naman since we have been...so, okey naman. We're okay. She's around. I wish her no negative vibes. We're being civil and we're being friends to each other as much as we can for his [Elijah's] sake. I don't want him to grow up kasi na he sees his parents are fighting. I don't want that."

"Every time I want to see him, I can do so. Just like the other day I picked him up. ‘Pag busy si Meryll kinukuha ko si Elijah then before dinner ibinabalik ko na siya. If I want to see him or be with him, all I have to do is just say it to Meryll."

"It's up to him. I want to see him nga in a commercial, e. Marami akong gusto para sa kanya. I want him to be a rockstar, kahit ano, kahit ano I will support him."

"Not since I came back. I've only seen, ah...just Meme [palayaw ni Meryll] and her Mom [BekBek Soriano] so far."

"Yes, I am. The show is called called Hush Hush. It's a very nice show. I mean, I'm not, you know, sugar-coating it or anything but it is a really good show because it's different. We're gonna be dealing with the issues behind the camera. So, you're gonna see relationships with bosses and artista. I play a director who has a relationship with an artista.

"It's not a reality show and it's not focused on anyone in particular, but it is focused on the life of an artista, so to speak. You have...behind all the glamor and whatnot, you know, that they also fall in love. They also get hurt, they also have hard times. Things like that. And we're gonna be tackling mostly everything that you don't see normally."

"Ah, siguro in some situations...yeah. Only because I used to study certain directors, you know. And lalo na I'm working with Direk Laurice Guillen. I asked her advice on how a director would do this, so, I kinda look at things now from a director's point of view and not an artista."

"Why not? I'm open to anything, you know. I'd like to expand my career not only in front of the camera, as well, you know. I also want to start producing. So, we'll see what happens. But this is a very good show."

"We're all together in the same show that's why we're all here. Before kasi we started the show Direk Laurice had us do a workshop, all of us. So, we all had to get close to each other and...you know, we all get along. The whole cast. We have new guys in there like Bruno. He's a Brazilian-Italian guy. He used to be a model and now he wants to try acting, and his character is a little bit based on his real life. Meaning, he was a model but trying to be an artista but he's struggling because of the language.

"Pero you know, he's good looking, yung talagang... And Ina naman plays an artista who doesn't want to make lamang. Parang, ‘I'm the star!' Parang diva, yeah, like that. Then, Krista [Ranillo], she plays parang like a newcomer in the station. She was pirated from another station. But she's the next rising star, parang ganun.

"Then, there's Joem [Bascon] also. Valeen Montenergo is in it. She plays my girlfriend in the show. It's a great group. And like I said, Direk Laurice has been directing the past few episodes so...my God!"

"For a long time, for a while. Australia is not going anywhere. I can always go back. So, until I'm sure that my family is secure then, my son is secure."

What about a new girlfriend?

"I really didn't come home to look for one. I came home to work. I have to work, focus on my work. I have set my mind to be alone. To be happy by myself," tapos ni Bernard.