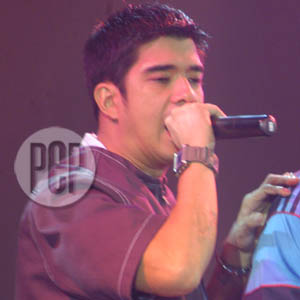 Master Rapper Francis Magalona is reportedly stricken with leukemia and is currently in need of blood donations.

Pupil band manager and Francis's good friend Day Cabuhat told PEP in a phone interview that any blood type and platelets will be accepted. [Subject to medical requirements, of course.]

"Donations may be made at the lower ground level of The Medical City in the name of Francis Magalona," relayed Day.

The Medical City is located along Ortigas Avenue in Pasig City.

Friends and relatives organized a blood donation drive to help the popular singer's cause. They're also asking friends from the media to spread the word regarding Francis's condition to encourage people to turn up and donate blood.

MASTER RAPPER. He is the son of the late matinee idol of the '5os Pancho Magalona and actress Tita Duran. Francis created his own mark in the entertainment industry as a rapper-performer when he released his debut album, Yo! back in 1990. The record popularized the nationalistic rap hit song "Mga Kababayan," which in effect introduced Pinoy- style rap to the mainstream music industry.

The ‘90s band explosion failed to deter Francis's popularity and significance in the music scene, as proven by the number of hit albums and good singles he churned out since Yo! He even collaborated with other artists and most of the time experimented with various sounds and genres to keep abreast of music trends.

Aside from singing and writing songs, Francis also plunged into hosting. He served first as a VJ for both MTV Philippines and Channel V before joining the country's longest running noontime show Eat Bulaga! as one of the regulars.

Francis was also tapped as one of the judges, along with music maestro Ryan Cayabyab and Pilita Corrales, for Philippine Idol's maiden season in 2006, which aired on ABC-5.

He also ventured into photography and music-video directing, megging videos for artists such as Sponge Cola, Join the Club, Gloc 9, Shamrock, Join The Club, Pikaso, Death Threat, and Pupil.