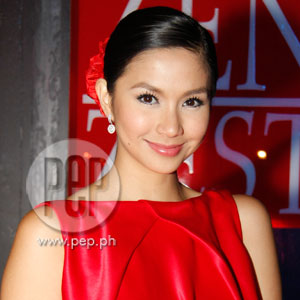 Instead of minding all the intrigues thrown at her, Mariel Rodriguez simply ignores them. In fact, the TV host-actress admitted that she has become more open in answering questions about her.

At the media junket prepared for Mariel by her newest product endorsement, Zen Zest, at The Spa, Bonifacio High Street in Taguig City, the Entertainment Live! host told PEP (Philippines Entertainment Portal) that she just lets her detractors do their thing.

The 24-year-old TV host-actress gave credit to Pinoy Big Brother, where she became a celebrity houseguest for several weeks, for becoming stronger in taking all these intrigues.

She said, "You know what, after my PBB experience, it really made me a stronger person. Lahat kaya ko na after that, and it's true. At first, I thought my world is going to fall apart because people didn't understand me. But then, it was just magnified."

Mariel also believes she should not hide anything from the public, especially she's hosting an entertainment talk show. Besides, she added, she has nothing to hide.

ENTERTAINMENT TURNS ONE. Aside from getting more endorsements, Mariel is also glad that her weekly entertainment talk show with Toni Gonzaga, Bianca Gonzalez, and Luis Manzano has survived its first year.

Mariel admitted that initially, they were afraid since she and her co-hosts would be competing with the longest-running entertainment talk show in the country, Startalk. They used to wonder, "'Kaya kaya'? Kasi mga bata naman kami."

As for the next episodes, Mariel said that their stories would be juicier and she would be more confident in asking their guests.