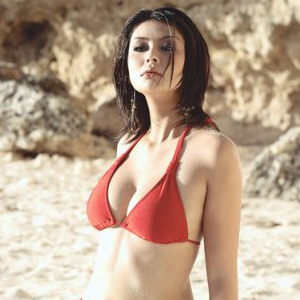 Iwa Moto's dad, Hiroaki Iwamoto, had been battling with liver cancer for some time now and his condition had not improved due to the poor medical facilities of the prison where he is currently confined for a drug-related case. His health declined and Iwa, who was not informed until only the last minute, went to Japan with her mother and sister Miki.

DAD'S CONDITION MORE SERIOUS THAN EXPECTED. After losing communication with her dad, Iwa ventured into show business. Her success in the field hampered her plans to visit her father in Japan, who by that time, got himself embroiled in a drug-related case in Nagoya. This was not all the bad news Iwa was about to hear.

The news came from a non-government organization that helps half-Japanese living here in the Philippines.

A HELPING HAND. Masahiro Okuda, chairman of Shin Nikkei Jin Support Foundation was thankful that his visit to Iwa's dad in Japan proved fruitful in getting Mr. Iwamoto's signature to validate Iwa and her sister Miki as his children, therefore granting them dual citizenship.

"I was looking for the father," Mr. Okuda related to Startalk. "While I was talking to the father, he started crying. He cannot stop since he's already sick as well. I told him, ‘If you could write, you could sign these papers. Because these are for the two daughters.'"

Hiroaki reportedly was eager to help his daughters and he signed the papers that would make his daughters citizens of Japan. After doing this, Mr. Okuda went back to the Philippines to help plan Iwa's visit to her dad. Last week, Iwa, together with her sister Miki and mother Precy, along with other family members, finally flew to Japan to visit the ailing father in prison.

Unfortunately, no cameras were allowed inside the jail as Iwa and the whole family went inside to finally meet Mr. Iwamoto. Due to strict measures in jail, they were not allowed to hold or touch Mr. Iwamoto as they were separated by a thick sheet of glass. Iwa was devastated at the sight of her father: he was so thin and was wincing in pain every time he spoke. He was so much in pain that he could hardly sit up in his chair. Because of this, their supposed meeting of 10 minutes was cut shorter. Iwa's mom could hardly believe that all the medicine Mr. Iwamoto was getting was just pain relievers.

IWA GUESTS LIVE AT STARTALK. Iwa guested today in Startalk to give a summarized interview of about what she found out during her stay in Japan. The already teary-eyed young star could hardly hold back the tears as she elaborated her father's ordeal.

Why was her dad not given any proper medication inside the prison?

RENDERED SPEECHLESS. Iwa related that upon seeing their father, she and sister Miki were speechless.

What did Iwa feel when she was just a few feet away from her father, separated by thick glass?

Were there no more hospitals in the area willing to take in her father?

Is she ready for her father's fate?

If given the choice, would Iwa be willing to give up her career so she could take care of her father once he's out of jail?