"YES!" magazine features the "new" home of the Gomezes 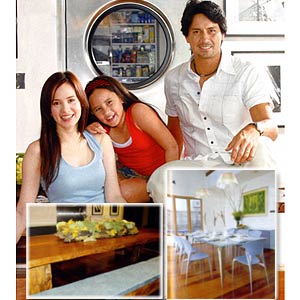 Richard Gomez credits his wife Lucy Torres for turning their "bachelor pad-like" house into a warm place for the family called home. Inset: One of the changes the couple did—replace their wooden dining table with a Capellini glas table.

When Richard Gomez was just starting out in showbiz, one of the goals he set for himself was to have his own house. And at the time he completed building his dream house, he also found his dream girl.

In the September issue of YES! magazine, Richard narrates: "Basta my major consideration was, number one if I was ready to settle in and be with a wife. 'Cause it's very important that you're ready emotionally, di ba? I was naman. Second, am I financially stable? Do I have a house where I can live with my wife? Tamang-tama, I was building this house and it was almost done. Perfect timing lahat."

Richard is referring to his 900-square-meter house-and-lot in Greenhills, San Juan, and the "wife" is none other than the lovely Lucy Torres.

When it was featured in YES! September 2001 issue, the house adapted a minimalist style that clearly described the actor's personality.

But after seven years, the house sheds of its minimalist theme. And Richard attributes the beautiful changes to his wife of ten years.

From Ormoc city, Lucy moved to Manila in 1998 to start a new life with her husband. During her first few months as Mrs. Gomez, while she was not yet active in television, Lucy spent most of her time arranging Richard's bachelor's stuff.

Aside from this, The Sweet Life host, who is a self-confessed OC (obsessive-compulsive), took charge of keeping their home organized. The sports gears that Richard uses, the books, painting, photos they have collected over the years, including the belongings of their only daughter Juliana—all are neatly organized in shelves, rooms, and boxes.

A NORMAL COUPLE. Also in this issue, the famous celeb couple describe their marriage, including their petty differences. For example, if Richard is the type of person who gives away old things, Lucy loves to keep them especially those with sentimental value.

Lucy, on the other hand, defends that she rarely throws anything away. "Unless it's talagang useless na at hindi na ma-fix. If it's something that I can fix in this house, I have my mighty bond. Ayusin ko pa, especially pag may sentimental value."

When it comes to marital problems, Richard and Lucy say they also argue but they don't fight.

When this happens, it's Richard who always makes the first move to reconcile with her. "Kasi, siya naman palagi ang may kasalanan," says Lucy. "But he's very sweet when he wants to be sweet."

Lucy and Richard also reminisced their love story, and talked about raising their unica hija, whom Richard describes as "rakista."

Read these and more in YES! September 2008 issue. Grab a copy now!