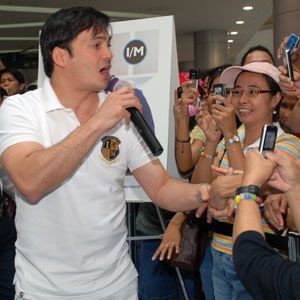 Gabby Concepcion's charm works for both males and females, teens and adults. During the launch of his latest endorsement I/M Clothing at The Block last August 24, the SM crowd got a bit unruly just so they could take a good shot of the former matinee idol.

The event started with an exhibit at the activity area of the mall. Several photos of the former matinee idol were displayed. There was a pensive Gabby in a dark blue collared shirt, a Gabby donning a red shirt and his smile that made him famous, and even an almost-wet Gabby in the pool.

Come lunch time, fans began gathering around the area with their digital and camera phones ready. Then, Gabby Concepcion emerged onstage and serenaded the crowd with cuts from his first self-titled album, such as “Nakapagtataka,” “Iisa Pa Lamang,” to name a few. An onlooker said, “In fairness, nakakakanta siya.”

ON BEING A SHIRT MODEL. While mostbrands usually prefer younger male celebrities as their models, I/M chose to launch its clothing line for men with the forty-four year old actor as endorser.

When asked about his timeless appeal, he said he doesn’t have any secret. “Magdasal ka lang. Matulog ka nang walang masamang iniisip. Maging humble,” he shared.

ON DAUGHTER KC. The dad of KC Concepcion is very happy at the rate his daughter’s career is going. He expressed his excitement over the screen debut of KC via the film For the First Time. He said: “Alam ko na susuportahan siya ng tao because maganda ang pinapakita niya and she works really hard.”

But the Iisa Ka Pa Lamang star admitted he’s not the type of dad who would meddle in the personal life of his eldest. On the issue of KC's reel love team with Richard Gutierrez turning real, he said: “Hayaan na natin sila.” But he described the leading man of KC as “mabait" and "good actor.”

While the quick interview was happening, people kept on taking his pictures, and Gabby was overwhelmed by the response of the people. "Nagpapasalamat ako at nandiyan pa rin sila,” he couldn't help saying.

But given the loud scream of the mall-goers that day, he will most likely stay.