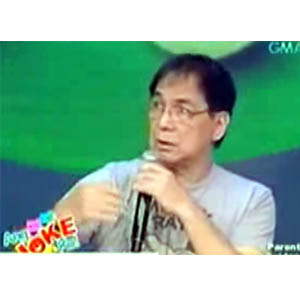 Is Joey de Leon (in photo) cleverly attacking Pokwang and Willie Revillame through a simple witty remark? Earlier today, August 19, Joey mentioned the word “aswang” during a skit together with Vic Sotto and Jimmy Santos in Eat Bulaga!

The skit showed the three taking turns in bragging about their lolo's cool nerves when confronted by an "aswang."

The lines delivered by the three, particularly by Joey, never seem to take a slant against anyone until the tail end of the entire skit.

IGNITING OLD FEUD. Joey is once again being attacked after dishing out a parody number during Eat Bulaga's last U.S. visit.

The next lines left a bad taste in the mouth of some listeners: "Makikita araw-araw / Ay mukha lang ng aswang..."

Yesterday, August 18, Willie once again used his noontime program, Wowowee, as a podium to lambast Joey and the content of his Los Angeles parody.