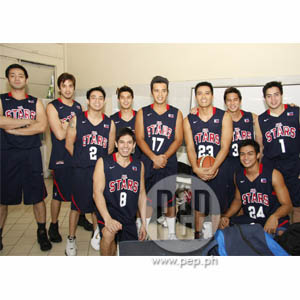 The show must go on—with or without Dingdong Dantes.

The All Stars—which is also composed of Dr. Hayden Kho, Marky Lopez, Arthur Solinap, Luis Alandy, and Carlo Gonzales—struggled to find their rhythm during the first-half and eventually fell behind by a considerable yet manageable margin. Come second-half, the All Stars decided to rely on their running game anchored mainly on point guard JC de Vera. The celebrity hoop squad also did a much better job in crashing down the boards aside from effectively setting up their half-court game to complement their run-and-gun attack.

Defensively, the All Stars also made up for their lackluster first-half effort, limiting their opponents output on the offensive end to seal the comeback. Both teams then traded baskets either for the lead or for the equalizer.

The game ended at 71-all, with the All Stars and Admirals fumbling on their respective potential game clinching possessions. Players from both squads, however, opted to forego playing an extra period.

BENEFIT GAME. The basketball exhibition game was organized by Dingdong with the help of PMI President Rizabel Cloma Santos.

"Kasi si Dingdong and my son are friends," revealed Mrs. Santos. "'Tapos every Sunday, itong grupong ‘to naglalaro sila sa campus namin sa Quezon City. And then napag-usapan, Foundation Week kasi, our foundation is in September. One month before [the] Foundation [Week] parati kaming may ganito, parang intrams, start of the games."

To mark the special occasion, Dingdong proposed to gather some of his celebrity friends to play in a friendly game against a PMI represented squad.

The idea was brilliant and definitely exciting especially for the students. But Mrs. Santos was wary of one thing: "Baka naman hingan ako nito ng malaking talent fee? I don't have that kind of money for all of them."

Dingdong came up with a suggestion—something that has been running inside his head for a long time.

"'Yong naging idea ni Dong was scholarship, so, sabi ko, ‘Sige, sige, pag-usapan natin.' So, the only agreement we had was we'll give him two full scholarships. He chooses kung sino ang bibigyan, then ang requirement lang namin is that whoever the student is, they will abide by the school rules. Kumbaga, no special favors, kailangan siyang pumasok, kailangan niyang i-maintain ‘yong grades, kasi he would be recognized as a Dingdong Dantes scholar, e, nakakahiya sa kanya," shared the school administrator.

Dingdong was not able to attend and play with his friends because of his commitment to go to the States to promote GMA Pinoy TV. But regardless of his absence during the actual event, the scholarship grant to be given out under Dingdong's name will definitely push through.

Mrs. Santos couldn't help but applaud Dingdong's advocacy, citing the fact that most Filipinos view work opportunities offered by shipping companies as a way out of poverty.

"You have to understand [that] most of the students who decide to become seafarers do not come from rich families," she said.

"They come from the province, they sell their properties and for them, basta makatapos lang sila ng course, get on a ship and earn dollars. So, talagang they're not from well-to-do families. And that's the main reason why we put up the school para nga makatulong sa mga kabataan na gustong mag-aral, gusto maging marino."

It wasn't hard convincing the school board to accept Dingdong's proposal to sponsor an aspiring marine. After all, the young actor's desire is in accordance to PMI's aim and objective.

ONE TEAM FOR CHARITY. It didn't require much effort either for Dingdong to convince his celebrity friends to play despite their busy schedules.

Young star JC de Vera on the other hand, was overwhelmed by the entire experience because aside from showing off his hardcourt skills, there's fulfillment in knowing that he was able to participate in a worthwhile endeavor.

Aside from the game itself, the event was also colored by some interesting bits and pieces, like Wendell Ramos not finishing the game after he hurt his shoulder, the same one that got injured last June 17 in Calatagan, Batangas, during the Kapusolympics.