FIRST READ ON PEP: Dingdong Dantes chosen by E! as one of the Sexiest Men of the World 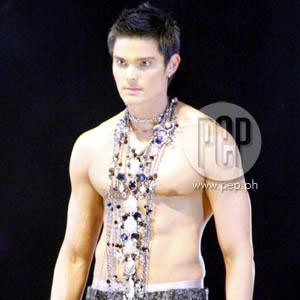 Philippine heartthrob Dingdong Dantes was chosen by E! Entertainment to be part of their list of 25 Sexiest Men of the World. He will join other hunky actors, models, and sportsmen, including soccer player David Beckham.

For the past several weeks, Charlene Sakoda, the executive producer of E! Entertainment Television in Los Angeles, California has been exchanging notes and calls to the manager of one of the hottest popular actors in the Philippines today—Dingdong Dantes. E! Entertainment is one of the largest and most popular networks in Hollywood and the most subscribed network around the world, which is available to 88 million subscribers in the U.S. and 600 million homes internationally.

E! Entertainment has decided to put Dingdong on their list of 25 Sexiest Men of the World.

The first e-mail sent by E! Entertainment, wherein they advised that "the actor Dingdong Dantes of the Philippines" might be included in their selection of 25 Sexiest Men, was first addressed to United Laboratories through Dingdong's Medicol Ibuprofen TV commercial. Later on, they did research on Dingdong's profile and work.

E! Entertainment's request was forwarded by Unilab to Dingdong's manager, Perry Lansigan. After that, e-mail exchanges flowed between Perry and E! Eventually, E! Entertainment decided to have Dingdong as the only Filipino celebrity to be included on their list. He will be featured in one of the special segments of E! through an interview.

Also stated in E!'s request letter is their intention to have footages and photos of Dingdong, his soap opera, movies, the Bench denim and underwear fashionshow, and the Cosmo event.

Although E! also eyed another Filipino talent, the network people all rooted for Dingdong. The final choice came from the president of E! Entertainment, who personally chose Dingdong on the list.

Part of the letter stated: "I can assure you that we are only looking to glorify Dingdong Dantes and will only mention him and your footage in a positive light. The show is scheduled to air in the 3rd or 4th quarter of 2008. We do not have a more specific time frame as of yet."

Aside from Dingdong, the list also includes celebrities from other countries who are also considered sexy and popular on their chosen field as actors and sportsmen.

We are currently producing a television program called "Sexiest: Men of the World" (the "Production") where we will feature 25 of the hottest males in the world. As part of the Production, we have decided to include Dingdong Dantes as one of the 25 Sexiest Men of the World! The list is still being generated but we can tell you as of the date of this letter that we have selected the following males:

Here is the series description: Young, blonde celebutantes may be what you're used to seeing on news stands, but when it comes to appeasing the insatiable appetite of the world, you've got to serve up the hottest most delectable dishes imaginable! We cover the entire globe searching for the sexiest beach-hard bodies and the delicious divas that can melt you with their voices and crush you with their sizzling sex appeal! We'll also discuss studs that can capture your attention in a flash, pin-ups with deadly curves, famous footballers with all the right moves and their wives and girlfriends who bask in beauty.

In a quick research made by PEP (Philippine Entertainment Portal), we found out that Gilles Marini is an actor who has appeared on the Sex And The City movie and several TV shows; Michael Lewis is an actor-model; Dan Carter is a rugby player; and, of course, David Beckham is a very popular soccer player. We haven't found anything yet on Kostas Martakhs though. But indeed, Dingdong is in a very hot company.