Revving Up for the most festive Octoberfest 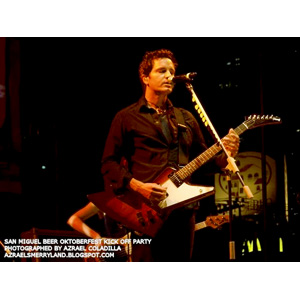 One of the highlights of the event is the performance of Third Eye Blind, also known as 3eb, an alternative rock band which hailed from San Francisco, California.

The raging ruckus right smack in the middle of Ortigas—where the monumental San Miguel Corporation building is situated—is enough to signal to everyone that Oktoberfest has finally arrived. This time bigger, better and longer.

15,000 SMB-lovers were present at San Miguel Oktoberfest 2008 Siento Bente (120 days) kick-off party, all ready for a night of pure inebriation. It was the perfect Friday for enjoying ice cold beer while watching some of the country's most-talented bands' live performance.

The area was divided into four stages: The All Girls Stage, The Reggae Stage, The Pop Stage, and The Main Stage.

Derek Ramsay, alongside Monica, hosted the program at the main stage, where Rivermaya played during a spectacular 15-minute fireworks display. Other bands such as Taken By Cars, The Bloomfields, and Out of Body Special also performed.

Star sightings included sexy comedienne Maureen Larrazabal strutting her tight frame in front of the GMA-7 crew. When the camera wasn't rolling, Maureen graciously posed for her admirers across the VIP fence.

Atop a highly elevated plank were Maverick and Ariel with huge Kapuso pins on their chests. They were also delivering a blow by blow account of the Oktoberfest.

Finally, around 15 minutes after midnight, Third Eye Blind—the most-awaited band that night moved to the stage to play their first song, "Losing a Whole Year."

"We've come a long way to play just for you so let's all have fun tonight!" band frontman, Stephen Jenkins addressed the very excited crowd. "You know, I have relatives from here so you guys don't really feel different from me," he continued before moving on to their next song.

Third eye blind played a total of 13 songs that night including their greatest hits from their self-titled album released way back in 1997—"Graduate," "Jumper," and "How's It Going to Be" and billboard chart-topper, "Semi-Charmed Life." They also played a couple of new tracks from their upcoming album Ursa Major, which is currently under completion.

Meanwhile, on the other stages, about 40 other Pinoy bands performed for the über energetic crowd despite the continuous beer-chugging, promising what seems to be the most eventful Oktoberfest yet.