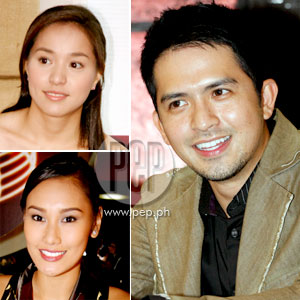 The word war between Carlene Aguilar (left) and Cristine Reyes may just find its closure after Dennis Trillo confirms his breakup with Cristine.

So long as Dennis Trillo is hot, the buzz about his love life will never go out of style.

His recent breakup with actress Cristine Reyes is still one big talk of the town. The fact that they never did confirm that they were together makes it even more intriguing.

The latest item about the Dennis-Cristine "unofficial romance" is that they already had an "official breakup." Dennis himself confirmed the split last September 1, by saying, "I am happily single."

Dennis's wish for peace may stem from the fact that things had become a bit turbulent again between his ex-girlfriend and Carlene Aguilar, with whom he has a child.

It will be recalled that there was a big brouhaha about Carlene's confrontation scene with Cristine on the set of Allan K and Jaya's TV show, K, The 1 Million Peso Videoke Challenge. This happened last November 7, 2007.

The incident started the Carlene-Cristine, or Cristine-Carlene, rivalry of sorts.

The K confrontation was cleared up two weeks afterwards with the two ladies even using TV as medium to bridge their gap. With lawyers in tow, the two shook hands in front of a million TV viewers. And that was that, it seemed then.

Christine and Carlene went their own ways: Carlene made peace with Dennis for the sake of their son, Calix Andreas, and Cristine got embroiled in rumors linking her to Willie Revillame, among others. (But that's another story.)

But the "rivalry" was bound to resurrect.

When asked to give her message for the two, Carlene, to Dennis, said: "Continue to be responsible... Tapos kay Cristine, just be true to yourself. Yun lang ang masasabi ko sa kanya."

She ended her interview, addressing both, with a mysterious, "Ingat."

Cristine's admission last July that she and Dennis were dating may just have been the catalyst that eventually sparked a word war with Carlene. After Cristine's interview, Carlene started granting a lot of interviews as well. Then the talk about the upcoming birthday of Calix was brought up. Carlene said she won't invite Cristine, and that she would only introduce her baby to "babaeng pakakasalan ni Dennis."

Then statements from both sides turned into a game of pingpong; and in the course of the exchange, the baby's name was repeatedly mentioned.

Will the word war ever come to a close? It looks it in the face of Dennis and Cristine's breakup. At least for now.

Dennis is now all over town promoting his new movie, I.T.A.L.Y. (I Trust and Love You). Given his new "single" status, he is now easy prey to teasings. At a presscon, he was prodded to kiss his co-star, Italian actress-singer Andrea de Lugo, and the free-again actor went head-on and engaged Andrea in a full lip lock. Is he ready for a new romance?

Judging by his interview with PEP, the actor may still be far from thinking love and the like. "Nandun yung masakit," Dennis said of his parting ways with Cristine.

Dennis apparently means that personal sacrifice is the high cost of keeping his career and having a future with Cristine.

The sudden breakup has put to a halt all the heated exchange between Cristine and Carlene, that's for sure. And in Dennis's world, a semblance of peace reigns.