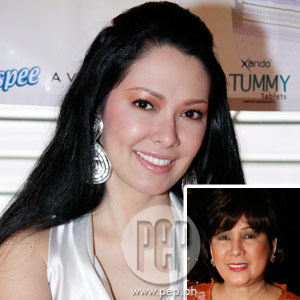 In the middle of the "tampuhan" issue between talent manager Annabelle Rama and GMA-7 Senior Vice President for Entertainment Media Wilma Galvante, Ruffa Gutierrez still believes that everything will be settled when the right time comes.

After the press conference of I Love Betty La Fea last night, August 28, at the ABS-CBN compound, Ruffa shared her thoughts about the said tampuhan, which began after GMA-7 gave a special birthday celebration to Dingdong Dantes and Marian Rivera last August 27. This was also the first day of KC Concepcion and Richard Gutierrez's movie For the First Time under Star Cinema, ABS-CBN's film company.

Annabelle considered this as "sabotahe," while Wilma simply explained that it was the only available date presented to them by the Araneta Coliseum management. (Click here to read related article)

For Ruffa, she thinks that this issue came out because of the stress that everybody felt before the showing of For the First Time.

"You know, there were so many intriga, a lot of people were trying to put Richard and KC down. I mean, it was a very stressful time, especially hindi pa halos tapos 'yong pelikula."

Now that it's already shown in theaters, Ruffa suggested that everybody should just be happy with the moviegoers' feedback.

"You know, kung may tampuhan mang naganap, it's not because my mom or my brother are threatened by anybody. It's just the fact na sana kung may gawin silang project, magsuportahan na lang, di ba? Pinatunayan naman nila na kahit na may tapatan isyu, talagang tinangkilik pa rin ng mga fans and pelikula."

KC-RICHARD LOVE TEAM. Although the movie has proved that there's good chemistry between Richard Gutierrez and KC Concepcion, many are still wondering if this reel partnership is already a real deal.

Meanwhile, Ruffa clarified that KC being the daughter of Megastar Sharon Cuneta is not the reason her family loves the young actress so much.

NO TO LONG-DISTANCE RELATIONSHIP. During the conversation, Ruffa said she was surprised to know that her friend Joyce Jimenez has already married her Filipino-American boyfriend Paul Eli Egbalic.

Upon hearing from a reporter that Joyce plans to return to the Philippines, leaving her husband in Los Angeles, Ruffa gave her unsolicited advise addressed not only to Joyce, but also to those who want to have a long- distance relationship.

With this, the media was prompted to ask an update about her and Turkish husband Yilmaz Bektas.

"Quiet na kami and thank, God," replied Ruffa. "Kung mayroon mang hindi pinagkakasunduan namin or kung mayroon kaming communication, I'd rather keep it to ourselves. You know, I think it's better."

Lastly, she said, "I think, for Yilmaz and I, it's best to fix things privately. Kasi, kapag maraming masyadong publicity, nagagalit siya, e. Gusto niya ng tahimik lang ,so I wanna give in to his wish. It's also good for me also kasi that's the process of moving on.

"I think Yilmaz and I are both mature and if there's anything na dapat pag-usapan, whatever it is, basta for the best interest of our kids, I think that's what we should follow."