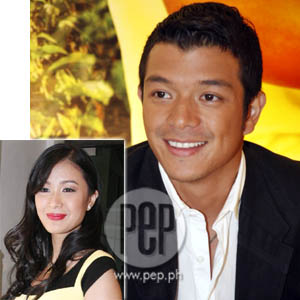 Although Jericho Rosales already promised that his interview with The Buzz last Sunday, August 31, would be the last time he would talk about former girlfriend Heart Evangelista, he still couldn't stop the press from asking about their past.

After the formal press conference of Kahit Isang Saglit held last night, September 4, at the 13th floor of ABS-CBN compound, the entertainment press asked the 28-year-old actor for an update about his life after the split.

He added that he has no plans of entering into a new relationship yet. However, he clarified that it's not because he has not yet moved on from his breakup with Heart, which he considered as his longest relationship.

"Tanggap ko na," said Jericho when asked about the end of their relationship.

ECHO STILL WANTS A TALK. In her past interviews, Heart already said that she does not want to have any communication with her former boyfriend. In fact, she was firm in this decision that she even changed her contact number. Jericho attested to this young actress's attitude, "Kilala ko si Heart, kapag ayaw na niya, ayaw na niya."

But reports reached Jericho that his former girlfriend is really trying to erase him from her life. He then explained why he still wanted to talk to Heart.

It can be recalled that Jericho and Heart ended their relationship through a phone conversation. Since then, according to Jericho, he had not seen Heart at all. Echo considered this as the most hurtful part of their split. "'Yong biglaan na walang maayos na pagpapaalam. Nakakatulala 'yon," said Jericho.

Why didn't he try to talk with Heart at that time?

Aside from these, rumors are also circulating about the possible cause of their breakup—including Jericho being a two-timer.

When will he will be able to resolve these things with Heart?