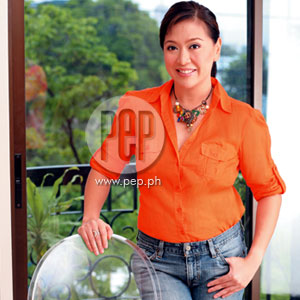 Karen Davila lives in a three-bedroom 160-square-meter condominium unit in a mid-rise building five minutes away from ABS-CBN. Karen, who designed the interior of the place herself and wanted to "make the place look bigger and more spacious," opted for the modern minimalist look. (YES! October 2007 issue)

In this celebrity-obsessed country of ours, anyone who harbors dreams of becoming the next Juday or Piolo might do just about anything—such as pick fights with famous people—to get 15 minutes of screen time on the evening news or weekly showbiz talk shows. But news anchors often don't have to do anything drastic. Because we see them delivering the news on television night after night, they get more than 15 minutes of fame. They get to become news celebrities themselves.


Broadcast journalist Karen Davila acknowledges the effects of television on her kind: "You can get sidetracked into thinking, ‘Wow! I come out on TV, I'm a celebrity, too.'" But Karen says she has no illusions about her work as a broadcaster.


"I think what broadcasters have to realize," she says, "is that your primary objective is to communicate. If people like what they hear—they like how you act on TV, they think you're competent, they think you do your job well—then you become a part of their consciousness."


If Karen Davila sounds as if she doesn't want to be in the limelight, that's because she never planned on being famous to begin with. "I never saw myself becoming a public figure," she says.


When she was still at the University of the Philippines in Diliman, Karen had set her sights on becoming a fashion designer. Although she took up broadcast communication at the UP College of Mass Communication, fashion designing was her first love. "I was a natural sketcher kasi," she says, "and I used to draw clothes when I was younger."


Hoping to improve on her latent abilities, Karen applied for a scholarship at the prestigious Parsons School of Design in New York City. Because she came from a modest background, that scholarship was the only way for her to study abroad.


Unfortunately, she didn't get it. Her dreams of becoming the next Donna Karan of DKNY had to be shelved indefinitely. The rejection was heartbreaking, she says: "I thought my world was gonna end."

Karen, however, had another talent waiting to be explored—public speaking. She was in her third year of college when a professor told her: "Karen, you're very good in speaking. You should be a newscaster." She could only reply, "I should?" Her professor said, "Yes, you can be a newscaster."


The rest is history. Karen Davila went on to have an enviable career in broadcast journalism. She started with GMA-7 in 1993, as co-anchor of Business Today. Though she would become one of the rising stars in the GMA-7 newsroom, it was her move to ABS-CBN in 2000 that catapulted her to star status.


Being rejected by the Parsons School of Design has turned out to be a blessing in disguise for Karen Davila.


"I made the best out of what I had," she says, "and the good thing was, honestly, I believe that God wanted me to be here. I'd just like to think that there must be a purpose at the end of this. When you account for your life, you must be able to have done or made a difference in the profession that you're in."


After 14 years in broadcasting, Karen Davila has racked up several awards that recognize her reportorial work. In 1999, she won CNN World Report's Best Medical Award for her story on compressor divers.

"I felt really good because it didn't have anything to do with people knowing you," she says of her CNN award. "There were no connections, no politics. They saw the report, and they liked it."

As for the award from Unicef, the United Nations Children's Fund: "I felt really special that they recognized my work for that, because it was really an advocacy for those kids in jail."


The advocacy work extends to Karen's current stint as the country's ambassador for World Vision, an international organization that works with local agencies and groups in contributing to the needs of less fortunate children.


Karen's stellar career, however, hit a low point after the death of Fernando Poe Jr. On December 14, 2004, a grieving Susan Roces lashed out at ABS-CBN for its alleged partisanship in its coverage of the May 2004 elections, when "Da King" of Philippine movies was a presidential candidate. Karen, who happened to be the reporter interviewing FPJ's widow, apologized to Susan Roces on national television.


Up until then, Karen was considered one of the leading anchors of ABS-CBN News. At that instant, she seemed to have lost her standing.


"I think it was the hardest situation in my life professionally, because she had lambasted ABS-CBN on live TV," she says. The interview was "very confusing," she adds: "You didn't know whether to ignore it or move on. And many people viewed my apology as meaning that ABS was wrong. But I was really coming from the Filipino culture of when you hurt someone, di ba, humihingi ka lang talaga ng dispensa?"