Piolo Pascual and his quest for true love 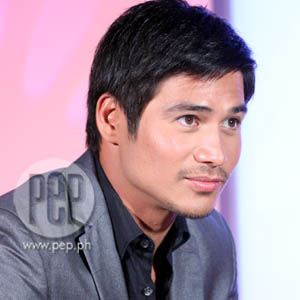 Piolo Pascual acknowledges that Marian Rivera is one of his dream dates.

Piolo Pascual is not called "Papa Piolo" for nothing. His good looks and charisma have certainly stirred up fans to fondly exalt him with the tag.

In local slang, "papa" is that guy who is regarded by girls as swoon-worthy.

In his latest endorsement for Pond's, the suggestion to win a date with him makes his love life and personal preferences open to speculation.

But before any fan can claim, "I may be the girl for Piolo," the Kapamilya hunk describes his dream date.

"Somebody who will surprise me," revealed Piolo. "I want her to be simple. Gusto ko yung walang pretensions. Someone who has both beauty and brains...Someone who makes sense and can give you good conversation...."

But if he already has the clear-cut description of "the girl," how come love eludes him?

Last February, Piolo was very vocal about his being single and dateless in the last five or six years. "The reason why I've been single for this long is because kapag nagkaroon ako ng girlfriend, gusto ko siya na yung last. Gusto ko siya yung pakakasalan ko. I wanna invest on someone na alam kong makakasama ko sa habambuhay.

As if to emphasize his position on courtship, in an August 2008 interview with PEP (Philippine Entertainment Portal), Piolo related: "My doors are open. I know naman God is preparing someone best for me, and I believe in destiny. I believe that after so many years I've waited, I deserve naman someone na talagang para sa akin.

"And I wouldn't wanna...parang, just try it out. Just for the sake of being with someone. Because, you know, I didn't wait this long just to fail. So, in a few years time, I'll be able to settle down and have a different life."

He sees himself married "in a few years. Hopefully, before I turn 35. I'm 31 now, so within four years."

Lately, he stressed that he and Angel are just friends: "People would think na dahil magkasama kami, it's a given na magkakahulugan kami ng loob. But I don't wanna give malice to the friendship that we have...especially after a year of working together."

With regard to his erstwhile onscreen partner, Judy Ann Santos, his last statement was: "Wala kaming problema ni Juday."

Two years ago, he and Juday were one of the hottest love teams on Philippine cinema. But the leading man had a tiff with the actress's real-life boyfriend, Ryan Agoncillo. Afterwards, the former screen partners avoided each other.

But he is not closing his doors to a project with Judy Ann. "We can only pray it happens. It's a nice tandem. Let's wait and see."

Aside from Angel and Judy Ann, and that short-lived rumor which linked his name to Rica Peralejo, there is not much talk about Piolo. He said of his love life: "You know what, I'd like to keep it private kasi mahirap ma-publicize or pag-usapan ng publiko. If I'll get romantically involved, siguro I'll keep it to myself first then we'll see what will happen."

WINONA TO INA. Piolo's dream date could be like a page torn from some romantic novel.

"Dinner muna, somewhere private para makilala pa namin ang isa't isa, where we can talk and then maybe after that we can go for a long walk under the stars and then we'll see what happens after that," he said.

And with whom? He names his top dream dates.

The actress who starred in the cult hit, Reality Bites, and who was one of the ‘it' girls of the ‘90s is Piolo's to-die-for dream date. "Ever since, I've always had a crush on her, ever since high school."

"And then my number two would have to be Natalie Portman." The star who made famous Star Wars' Princess Amidala could definitely make the actor's fantasies come true.

Marian Rivera? He was pressed.

In the end though, as far as reality goes, Piolo's girl is still an elusive dream. "As of now, wala pa rin akong love life but I'll just wait for that. When she comes, yun ang magiging priority ko."