Malaysian actress Carmen Soo: "Nobody likes to be tagged as boyfriend stealer." 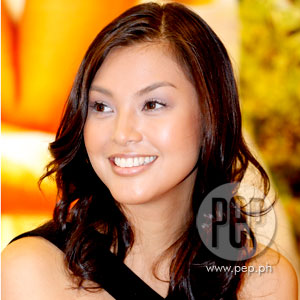 "Well, I don't have no idea. I don't know the actual timing it was happening, so I don't know what's going on. So I just knew after...I think, it just so happened that we were shooting when it happened. But I think, it could be any girl or actress, and it's just so easy to point me," says Carmen Soo about being dragged into the breakup of Jericho Rosales and Heart Evangelista.

"First of all, I think, everyone went to Malaysia...It's kind of adjusting working here and the shoot of Malaysia is different, like the kind of hours, of course, the style and what they like to see in the teleserye and script itself. It's a whole big adjustment and I think, it's an amazing experience. It's a learning experience for me and every single actor has something different to offer, and it's just an honor to be able to work with all of them," nakangiting pahayag ni Carmen.

PEP (Philippine Entertainment Portal) asked Carmen if she will consider to continue working in the Philippines as an actress after Kahit Isang Saglit.

"Well, I have been asked before and, maybe, if another good project comes along. But unfortunately, I don't speak Tagalog just yet, so I have to stick to English for now," saad niya.

"Well, I don't watch too much TV, unfortunately," sagot niya. "But I heard about Pangako Sa ‘Yo and his name, but that was all I know about him. That he's big and he also did a Malay movie in Malaysia. So before I came here for the first press conference in April, I Googled him and found out more about him because I'm gonna work with him."

So, how does she find Jericho?

"Oh, he's great!" bulalas niya. "I've met him on the day of the press conference, just two hours before the press conference. And he's warm, he's nice, and I know that he's a big star. And I just realized how big star he is until I came here. I knew he's big, but maybe not that big... But wow, in awe! He's really nice, very warm, and very open to be working together and not like, ‘Okay, I'll do my thing and you do your thing.' But you know, it's like, ‘Let's work together.'"

Hindi naman itinanggi ni Carmen that she finds Jericho attractive. "Of course", sabi niya. "He's a very good-looking man and nobody can deny that."

"I don't think that relationship is my priority right now, so, no!" natatawa niyang sabi. "But what I like most with Jericho is the fact that he has a very positive vibes around him, even though he's been going through a lot with his personal life.

"Actually, as I've said before, I didn't realize that he was going through that [breakup with Heart Evangelista] until probably more than a month after it happened. And I knew that he was upset about something, but I didn't know for what. But he always has a positive vibes and even till today when he is very tired, overworked, he still wants to be happy about things and really looking forward for every day. And I think, I learned that from him."

"Well, I don't have no idea. I don't know the actual timing it was happening, so I don't know what's going on. So I just knew after...I think, it just so happened that we were shooting when it happened. But I think, it could be any girl or actress and it's just so easy to point me," pahayag ni Carmen.

Nagalit ba siya when she first heard about the issue?

"I'm kind of mad because nobody likes to be tagged as boyfriend stealer. They know. He knows. So okay..."

Tumawa muna si Carmen bago sumagot. Aniya, "Actually, coming here in the Philippines is a bit of a culture shock for me because everyone is so involved in the entertainment industry, unlike in Malaysia that everyone can...you know, he can walk around. People can recognize him but he can do things alone. So, it's still a culture shock for me. But most of the time, he's busy doing a lot of things, that's why."
Read Next
Read More Stories About
Carmen Soo, Kahit Isang Saglit, Jericho Rosales, Heart Evangelista
Post a Comment
Featured
Latest Stories
Trending in Summit Media Network